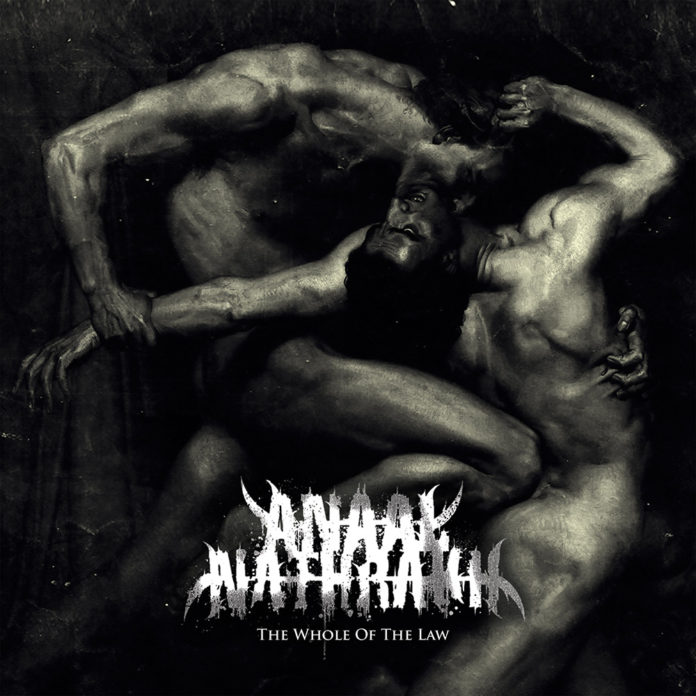 Anaal Nathrakh are really an acquired taste. If you are unfamiliar with the most extreme sides of heavy metal, they might come off as pure noise. A cacophonous hellscape that simply inundates everything around you. And, unless you are prepared for what you’ll encounter in one of their releases, their music might not change your perception one iota.

These introductions notwithstanding, those familiar with the genre would certainly agree that, within the confines of extreme metal, Anaal Nathrakh have the particularity of, despite placing pure chaos and mayhem as one of their priorities, emphasizing melody. This might sound like an oxymoron but, listening to The Whole of the Law, there can be no doubts about it. From the Orff-esque choirs that dramatically open “Depravity Favours the Bold,” there’s no question that Dave Hunt and Mick Kenney are about much more than mere aural destruction (unlike, for example, the chaos of Gulaggh and Stalaggh, which just hope to drive you fucking insane).

It is hard to talk about message when it comes to a band that doesn’t publish the lyrics to their songs. While I find the practice to be annoying and unnecessary (whether it’s being done here by Dave Hunt, or by Gaahl with Gorgoroth), it is unlikely that, hidden behind the shrieks and screams, there are many happy-go-lucky messages. If the song titles are anything to go by, with tracks like “We Will Fucking Kill You,” “The Nameless Dread,” “On Being a Slave,” and “Hold your Children Close and Pray for Oblivion” serving as our guide, and the samples of painful shrieks (like the muffled sounds emanating from a gagged man in “…So we can die happy”), it is clear that the intention is to keep you on your toes, to open your eyes to a bleak, destroyed city, and force you to walk through the charred remains. Anaal Nathrakh have mastered the art of sensory torture, and it is impossible to remain indifferent.

Despite the relentless hammering coming out of the album, the brutality of this power is not to be confused with monotony. There are electronic sounds used in “In Flagrante Delicto,” “The Great Spectator,” and “On Being a Slave,” for example, of the kind that immediately made me think of Blacklodge, particularly when they are combined with Dave not really singing, but rather slowly growling at the microphone. The album is produced in a way that seeks to give an incredible depth to the music, mixing real choirs with  overdubbed voices that give a sense of a choir of demons yelling in your ear, while your brain continues to be hammered by the endless, fast-as-lightning drums. It is this variety within the chaos and bedlam, that truly make this album memorable (including a surprising cover of Iron Maiden‘s “Powerslave”).

Dave’s voice has been used in a terrific way, demonstrating the kind of versatility that I simply did not expect from him. He goes all over the spectrum, from clean singing in “In Flagrante Delicto,” the brutal growls in “And You Will Beg for our Secrets,” the cacophonous shrieks of “On Being a Slave,” and even an unexpected falsetto in “Extravaganza!” that had me going through the liner notes trying to make sure this wasn’t a cameo by King Diamond.

Depending on how prepared you are, The Whole of the Law might feel like a good, or a bad kind of torture. It might be difficult to stomach for those who prefer their metal to remain on the softer side of Kreator or Sodom, but if you can give this release a chance, I am certain that they payoff will be worth it. The first sounds coming out of your speaker should be “we have such sights to show you.”

While it might be hard to get through for those unfamiliar with them, The Whole of the Law will give you the kind of delicious torture that a cenobite would kill for.
Reader Rating1 Vote
Pure sensory torture
Great use of William Bouguereau's "Dante and Virgin in Hell" as their cover art
Pure sensory torture
A not completely convincing Iron Maiden cover
5