There’s very little in my cold black heart that doesn’t beat for a band like Soilwork. They were in the lump of bands like Carcass, Arch Enemy, At The Gates, that I had first listened to when first getting into the genre and to say that I was jazzed to meet them was a bit of an understatement. Enter Dirk Verbeuren, the veritable Tom Hanks of the heavy metal world (in case you didn’t know, Tom Hanks has an incredible reputation for being the ‘nice guy’ of Hollywood). There was a  lot surrounding Soilwork that I wanted to ask, but it ends up boiling down to just a few several question that are on a lot of people’s minds, mainly dealing with the loss of guitarist/songwriter Peter Wickers and his replacement and the obvious fears that come with accepting a new member into the fold. And with that, how they hell the managed to pull off the feat of a double album where there is no filler. It’s a lofty task to sell the band and the label the concept of a double album melodic death metal masterpiece, but Bjorn  “Speed” Strid did just that, my thoughts as to how he did it is as good as yours though. Enjoy the transcript

[Author’s note: I decided to try something different than your typical interview with this one. Instead of having my voice constantly interrupting, I felt like letting the attention be on Dirk. Consider it a spotlight on the artist. Yes, there were actual questions, but you want to hear him talk, not me. So, I just pieced together pieces of the interview in a logical manner which can easily be followed. But, in case you were wondering, the interview questions are included below.]

Metal Blast: So, how are you enjoying spring in Toronto?

Dirk Verbeuren: I guess it’s spring in Toronto but we are used to it; we’ve done quite a few winter tours in  Canada, and Canada’s always good to us. We are enjoying it

MB: The Living Infinite has been killing it in the charts, are you at all surprised about how people have received it? Where you expecting such a critical response?

DV: You never know when an album comes out what’s going to happen, we’re super impressed and excited that people have embraced it the way that they have; we put a lot into it obviously , but the people ultimately decide the fate of a record.

MB: The decision to make a double album is strange, at least in the death metal world. Where did the idea come from?

DV: Classic rock where double albums are a lot more of common thing a few years back.  I think ‘Speed’ came from there . So we ended up with something like 27 songs and we felt that there was a lot of good stuff in there so we just went for it. The result was The Living Infinite

MB: There’s a rumour going around that you guys works so hard on the record because there was a “certain someone” that was gone and you wanted to push yourselves further and see if it could be done?

DV: Peter Wichers And us decided to part ways last year. And Peter, as everyone knows was a big part of the writing in Soilwork through the years.  The live aspect, the touring and everything took a real toll on him, it was one of the reasons he left the band back in 05 and when he came back with us to do The Panic Broadcast with us he really tried to make the live thing work. He tried his best but it didn’t work out for him, [in the end] we had to separate with Peter, it was a mutual decision. And David Andersson, who’s our new guitarist, stepped in when Peter and us separated. He’s a good friend and he’s toured with the band several times in the past in America, Japan Australia, he’s been on the road with us several times when we had guitarist troubles.  So he’s somebody that we knew would fit with us on a personal level.  He’s also an awesome player and composer.

MB: Were you at all hesitant to welcome him into the fold? Would it all work out?

DV: Personally I had some doubts [about whether] we were going to be able to pull it off and keep the Soilwork style intact. And I think he brought a lot of really good stuff and so did everyone else I think we really succeeded in creating an album that stands proud in the Soilwork legacy. This was the album where it was most the group effort as far songwriting and arranging goes, everybody really took apart in it, I think it shows on the record; it’s diverse, it has a lot of things happening, and the songs are really “finished”.  We put a lot of work into them so, as much as things were spontaneous there was a lot of thought behind it. I’m really proud of the record, I really am.

MB: As someone who has been in extreme metal for so long, what are some of the trends you miss?

DV: I miss a lot of the human sounding productions. Luckily there is a lot of throwbacks stuff to old thrash and old death metal and a and bands that sound like a band playing in a room together.  Personally I prefer that. And I would like to see more of that; stuff that came out then Metallica, Slayer, Suicidal, Obituary, Morbid Angel, Terrorizer.

DV: It’s a long-standing project and tons of people have asked us about it over the years and years, and rightfully so. We are trying our very hardest to make it happen; there are some plans to do stuff this year. The DVD will happen for sure. 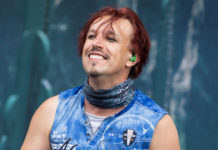 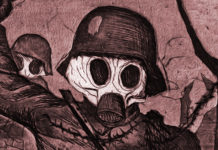 The Bloodlust of Empires – A 1914 Interview

Down the Rabbit Hole with Diablo Swing Orchestra

[…] A transcript of the interview is available here. […]

Deforming the Cord of Life: An Interview with Watain

Tales Of Lovecraft – An Interview with Astrophobos