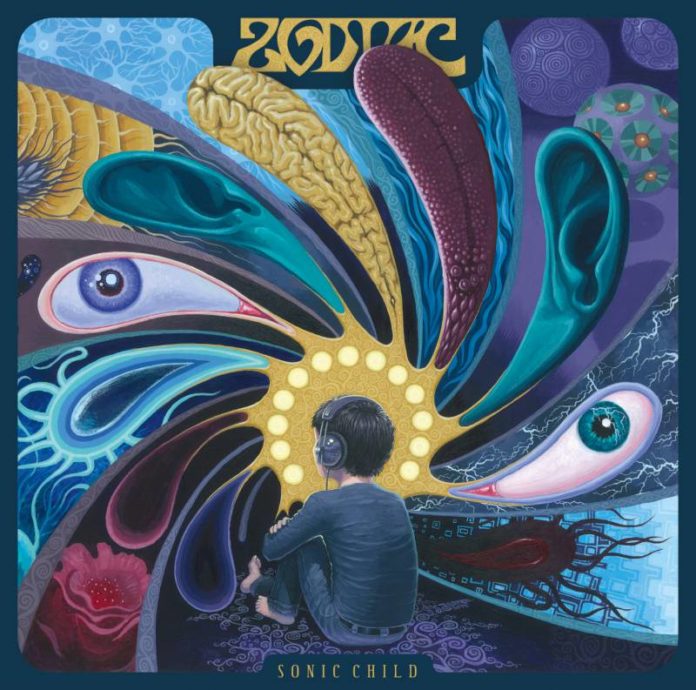 The 60’s and 70’s were an extremely important time in heavy metal history; the foundation was laid by blues rock bands like Cream and Blue Cheer that turned up to 11 in the 60’s, which led to the thunderous heavy metal revolution spearheaded by Black Sabbath and Led Zeppelin. Heavy metal has seen many changes since then, but there are still plenty of bands that incorporate the classic bluesy side of 70’s metal into their sound, and have even taken cues from the psychedelic rock of the previous decade.

Zodiac are a German band that certainly have both boots planted in the 70’s hard rock/metal scene, with hints of psychedelic rock incorporated for good measure. Sonic Child marks the band’s third full length release, and their second for Napalm Records. Sonic Child has a lot of different sounds blended in; psychedelic rock that nearly moves into space rock territory, classic 70’s metal along the lines of Led Zeppelin, and gritty old blues. “A Penny And A Dead Horse” sounds like a long-lost Mississippi Delta blues tune, with slide guitar, and soulful vocals; nearly 3 minutes in, though, the band picks up the pace with electric guitars and drums that go into super spacey psychedelic territory. “Rock Bock Bottom Blues” is another slow number that goes into the bluesy side of Pink Floyd, or even the slower tracks on Bridge Of Sighs by Robin Trower, and is my pick for the best track of the album. Zodiac have some more up-tempo numbers as well, with tracks like “Holding On” and “Good Times” showcasing a great driving rhythm section, and some pretty memorable lead guitar work as well.

Although there are plenty of moments of greatness, unfortunately Sonic Child as a whole feels just a little too watered down; Zodiac are just a little too pleasant sounding, bordering on some serious radio-rock tendencies. Now, as a rule, I don’t write a band off for getting played on the radio, or on TV for that matter, but sometimes you just get the feeling that a band is looking for mass appeal, and I get that vibe here. While I enjoy the bluesy tunes, and even the rockers, there’s just something about the approach to those sounds taken by Zodiac that feels a little dishonest; I don’t get the feeling that the band grew up listening to the bands that they seem to be imitating. They almost come across as the band that plays the big music festival that people that kind of like Led Zeppelin or Deep Purple would flock to, so they can say that they’re in the know with the new underground hard rock movement. “Swinging On The Run,” “Sonic Child,” and “Sad Song” are mediocre at best, while “Just Music” and “Not Fragile” are down-right offensive in their obvious bid for radio play and mass appeal.

The production is immaculate, and there are plenty of classic studio tricks like panning the guitars left and right in the mix, and some great psychedelic sound washes on some of the slower tracks. There’s definitely a 70’s vibe in the tone of the record, but you can tell that Sonic Child was recorded in a modern studio, as it’s cleaner sounding than anything that ever came out of that era. Another big flub on the record is the intro track, “Who I Am”; it is absolutely atrocious, and sounds like an easy listening radio selection, or elevator music with an audio clip that sounds like it came out of a self-help audiobook. It sounds nothing like the rest of the album, and is completely pointless; rather than set the tone for spiritual cleansing, like I assume it’s meant to, “Who I Am” put me on the defensive, hoping to the powers-that-be that the rest of the album isn’t going to be more of the same.

Zodiac are talented musicians, but being good at an instrument doesn’t always mean being good at songwriting, as you’ll hear on Sonic Child. There are some excellent moments, particularly when the band slows down and gets into the bluesy, psychedelic side of things. The bulk of the album, however, feels like filler, and seems to be geared towards appealing to as wide an audience as possible. Let’s hope that next time Zodiac tries to write something with a little more grit and originality.