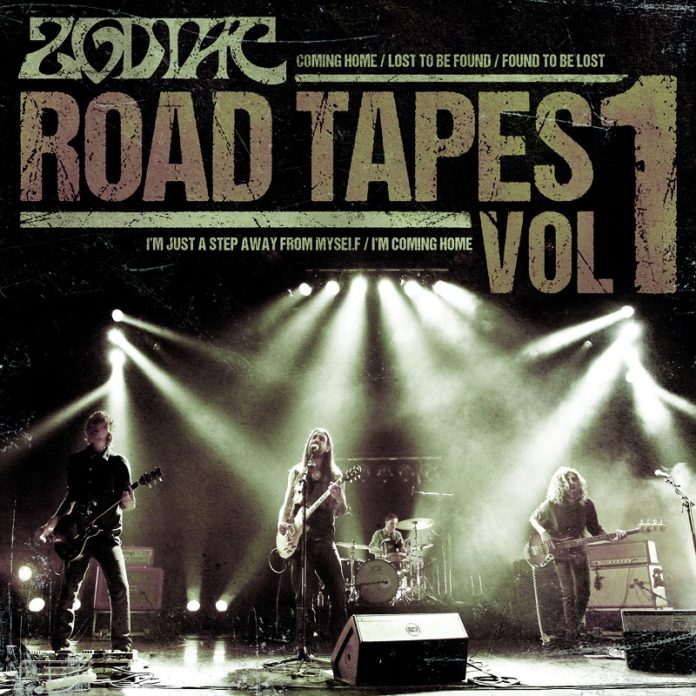 Prior to picking up this album for review, I had only heard of Zodiac in passing. I’d seen a few of their album covers, smokey, psychedelia-drenched things they were, and had always been intrigued. I figured that, in some ways, having my first real exposure be a live album would allow me to review not just a single document of the band, but to compare their persona and overall vibe to other bands in their vein. Of course, so much of that comparison then hinges on both the sonic quality of the live recordings, as well as the individuals performances that were (hopefully) taken straight from the concert and pressed on to disc.

Overall, Road Tapes Vol. 1 did not disappoint. It’s equal parts guitar-drench, sabbatherian romp and mournful 70’s rock cry, recalling great blues-based rock albums like Taste‘s Live at the Isle of Wight or Led Zeppelin‘s The Song Remains The Same. The individual performances are, for the most part, excellent, even if no one here is by any means a super-technical Steve Vai type. Everyone’s playing is loose and dirty and full of soul; exactly how it should be for this kind of material.

The weak link is in the vocals of Nick van Delft. While through most of the album he works with a subtle, weathered rasp that works beautifully with the more up-tempo material on the record, in some of the more mellow moments, like on “Rock Bottom Blues”, he shifts in to a slightly cleaner head-voice that is frankly a little nasal for my liking. While this doesn’t make him a bad singer overall, it’s his biggest flaw, and one that’s apparent to the point of distraction.

Road Tapes Vol. 1 seems to accomplish what it sets out to do: be a compelling and engrossing live recording of a band that is doing what countless bands before them have done, and what many more will do in the future. There’s not a whole lot to be found here that is truly “original”, but even Led Zeppelin (clearly a big influence on Zodiac) crafted their sound by aping their American blues progenitors to the point of plagiarism. It doesn’t make Led Zeppelin, or Zodiac for that matter, any less valuable. Uniqueness does not necessarily translate to quality, and I’ve heard much more individualized takes on this genre that weren’t nearly as compelling as this one. Great record for a rainy afternoon, and something that will certainly scratch your itch for psych-influenced 70s goodness.

IN A NUTSHELL
By no stretch is there anything unique to be found here, but if this is your bag, then this will certainly be worth your dollar.
POSITIVES
A cool, mellow, but still grooving record
Excellent live production
Loose and soulful playing
NEGATIVES
Nick Van Delft's head voice can be unappealing at times
4