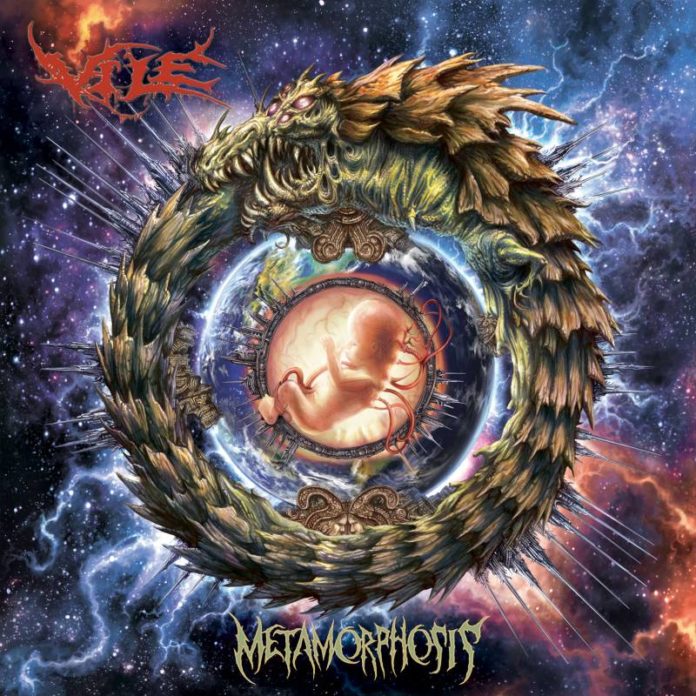 California has always been known as a bastion for quality brutal death metal bands.  Vile has been one of them and have consistently come to the table with Cannibal Corpse-worship oozing out of their older material from “The Stench of the Deceased” and “Depopulate“.  Juan Urtega had been a linchpin of the band handling vocal duties and most production during recording.  Juan’s vocals were a distinguishing factor of what made Vile so good with his guttural yet intelligible style belting on top of the charismatic and engaging riffs.  Vile‘s last album, “The New Age of Chaos“, showed that the band were beginning to mature in their time of being one of California’s longest-running brutal death metal bands.  They combined their catchy riffs and stylistic drumming with more complex song-structures, and it was known from then on that Vile would be operating differently than its old incarnation.  Unfortunately, Juan Urtega decided to leave the band after the recording of “The New Age of Chaos“, and that was in 2005.  Mike Hrubovcak (Monstrosity, Divine Rapture) was tasked with filling the lead vocal spot, and after hearing this news I began to wonder how he would fit in musically with the band.  Finally, after six years, they have released a new album for us, just simply titled, “Metamorphosis“.

If there is one noticeable change I had to name within “Metamorphosis,” it is that there is far more melody in the music than there was before.  We at least saw a glimpse of it in “The New Age of Chaos“, but it seems like the band had gone to great lengths to make sure their listeners knew this wasn’t just going to be “another” Vile album.  There are quite a few interesting ideas to be had in this album when it comes to Colin Davis’s guitar-work, and it feels heavily influenced by the melodic works of Decrepit Birth, as well as later works of both Monstrosity and Deicide.  The listener can certainly tell that the band has grown, but while they may have found new ways to express their musical creativity, they have stagnated in not contributing with what they used to do best.

The brutal Cannibal Corpse edge they once had is no longer alive in this reborn version of Vile.  Even when they had that certain sound or mix to them, they weren’t just another Cannibal Corpse-styled death metal band; they brought their own flare to the scene and won over many fans with being one of the first bands who were able to put California on the map for being home to premier and elite brutal death metal.  Every once in a while you hear glimpses of the genius that was once there, but when you get tracks like “The Revealing,” “What Lies Beyond,” and “Rise” one right after the other, you cannot tell the songs apart if you aren’t paying attention.  They are very melodic and well-played, but all three tracks sounds like clones of one another, having long speedy and melodic riffs over and over again with the same drum patterns being recycled.  This could be a matter of the production sounding slightly flat when it came to mixing the guitar and vocal tracks, but it is a big issue that I foresee holding back the true potential of this album.  It also doesn’t help that “Prophetic Betrayal” sounds like a re-worked version of “Deafening Silence” from “The New Age of Chaos“.

In fact, this album sounds like a lot of b-sides from “The New Age of Chaos” in general, except really driving the point home of trying to separate themselves from their brutal death metal past.  There are portions of it that I really like, and others that I just think “Okay, I get it.  Let’s move on…”  I was hoping that with the addition of Mike Hrubovcak on vocals that Vile would continue to make an intense mixture of what they had on “The New Age of Chaos“, but instead it seems they wanted to put themselves into the camp of ‘melodic death metal’ instead.  There is nothing wrong with this in theory, but when the ideas on a new album become completely transparent and one-dimensional not even a third of the way through, there’s a problem in terms of replay value.  Again, there are lots of pieces of this album I like, but they are quickly countered by hearing those same ideas over and over again.

I applaud Vile with having the guts to try and cut themselves out of the mold they once were in, but they tried to dig themselves completely out of it too soon, and now creating a musical identity crisis with themselves.  I have referenced “The New Age of Chaos” six separate times in this review, so if you’re looking for material from Vile that may satiate your need for a healthy mixture of melodic brutality, then look to that album instead of “Metamorphosis“.