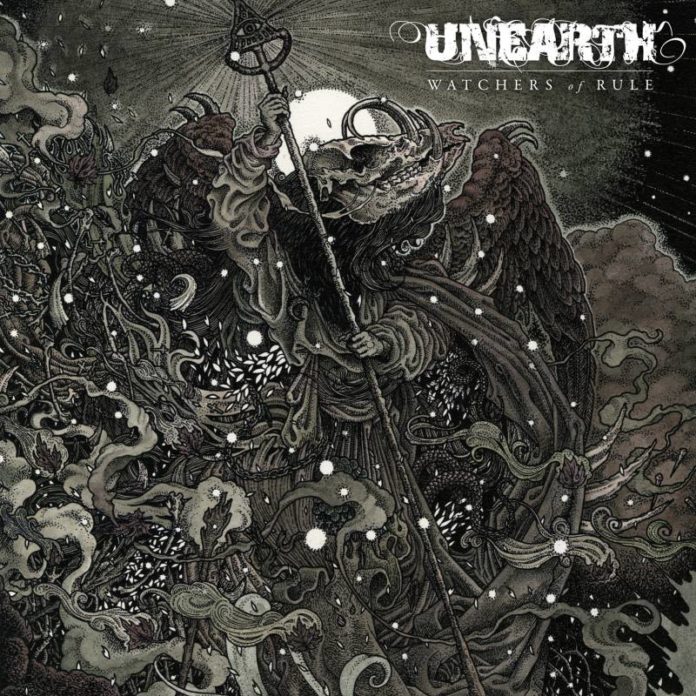 Unearth have been a part of North American metalcore since 1998, and have influenced countless bands. Rather than play the angular, math rock-oriented form of metalcore that was so popular at the time, Unearth vied for a more melodic take on the sound, with a heavy At The Gates vibe. Alongside bands like Killswitch Engage, Shadows Fall, and God Forbid, Unearth brought the emphasis in metalcore back to metal, with actual lead-guitars and even some clean vocals. With 6 albums now under their belts, as well as multiple tours, Unearth have become one of metalcore’s most beloved acts.

Watchers Of Rule contains pretty much everything you’ve come to expect from the band. Aggressive, mid-ranged screams, chuggy rhythm guitars that are firmly rooted in the heaviest of hardcore, and super melodic lead guitar work that pushes Unearth firmly into heavy metal territory. Unlike what’s usually the case in this style of metalcore, Unearth have omitted the clean vocals, and I’m very thankful for it. The thing I find disappointing with the album is that the guitar-work hasn’t really progressed much; the album intro starts off with some epic melodic twin-guitar work that sounds almost like the band is going to power metal territory, but this only lasts about 30 seconds. As soon as the intro is done, Unearth abruptly switch gears, and go into the down-tuned crunchy style they’re known for, complete with breakdowns and pseudo-Gothenburg sounding melodic metalcore riffs. The problem is that the songs sound exactly like the ones you’ve heard on every last one of Unearth’s other albums, and I have a hard time differentiating the tracks from each other. Even though the guitarists are certainly excellent musicians, as they demonstrate with some truly jaw-dropping solos throughout each song, I’m left frustrated with them when they choose to devolve into chugging breakdowns. The band’s considerable musical abilities are often undermined by their need to create mosh pit anthems; “Lifetime In Ruins”, for example, has some truly great melodies, some super heavy riffs as well, but the breakdowns just take up too much of the song’s focus. This happens too often in the album.

In the production side of things, Watchers Of Rule is the only album besides 2006’s In The Eyes Of Fire that hasn’t been produced by Adam Dutkiewicz from Killswitch Engage, and it shows. While I like Adam’s guitar-centric approach to production, I feel like the low-end is often missing from his work. That’s certainly not the case here; while the guitars still take center stage, the drums and bass are good and prominent in the mix as well, which really brings out the hardcore edge in Unearth’s sound. While I may often prefer the more metal side of things, I have to admit the “core” side is pretty catchy.

Overall, if you like what Unearth have done up to this point, you’ll not be disappointed by Watchers Of Rule; however, if you’re looking for a little more variety from song to song, this is certainly not for you. Although I admire the band’s consistency in sound, I find it hard to really remember a single song in the bunch, and I’m also disappointed that the guitarists are still both playing well below their considerable skill-set. Still, if you’re just looking for a soundtrack to act out your pent-up teen angst, this will do in a pinch.