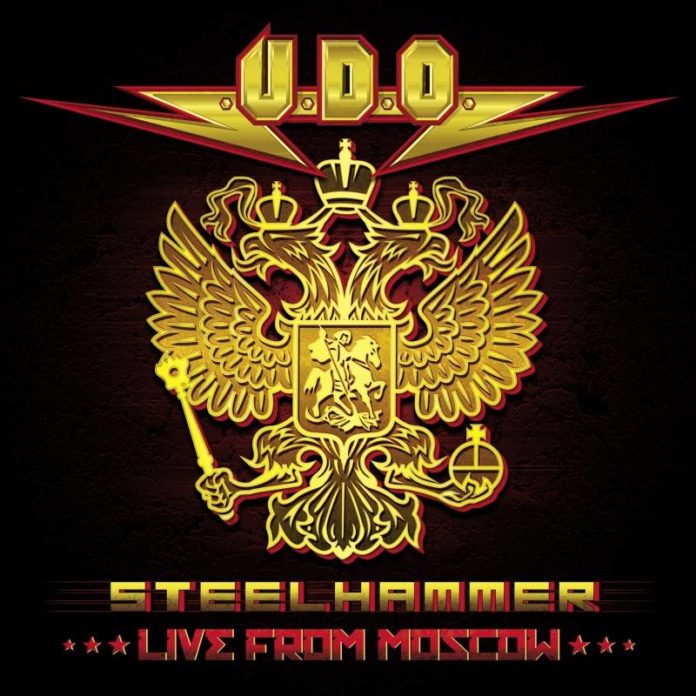 U.D.O.‘s latest studio offering, Steelhamer, was a really good record. Though it had weak points, it was overall one of Udo Dirkschnieder‘s finest post-Accept releases. So it’s really only natural that he and his band would choose now to release another live document. While I was kind of anticipating that this album (recorded in Moscow during the Steelhammer tour) would be a bit superfluous due to the abundance of live releases from this band, I was instead met with probably their best live album to date.

The first reason for the high quality is the overall lack of Accept material. I am a HUGE Accept fan, but I’ve always thought that U.D.O. had a habit of overusing material from his former band. U.D.O. has a lot of great material that deserves to be played just as much as “Fast as a Shark” or “Balls to the Wall”, and while U.D.O. should by no means ignore the old Accept stuff, some of their previous live releases would dedicate over a third of their total run-times to Accept. This time out only “Metal Heart”, the closing track, represents the man’s past. It’s an incredibly welcomed change.

More importantly, this is one of the best sounding live albums in the U.D.O. catalog. It’s crisp, clear, full bodied and well rounded, with Udo pushed right out front where he should be, showing the world just how little his vicious vocal bite has dampened since the mid-eighties. This is most evident on galloping walloper “Go Back to Hell” from Animal House and “Future Land” from Faceless World, as well as fave-rave “Holy” from the ’99 album of the same name.

The Steelhammer tour was the first run for U.D.O.‘s new line-up, with longtime side-men Stefan Kaufmann and Igor Gianola having both recently left the band. Their replacements, Andrey Smirnov and Kasperi Heikkinen, do exactly what’s required for membership in this famed Teutonic war-machine, supplying soul and groove with their playing, putting their own spin on solos, refusing to be restricted by their predecessors’ works.

A live album like this is incredibly refreshing in an age when good quality live documents seems to have become a lost art. Live albums have, when done right, become some of the most legendary records in the genre (See: Unleashed in the East, Live After Death, Tokyo Tapes, etc.) If Live from Moscow had been released in the mid-eighties, I have no doubt it would have been hailed as a classic too.