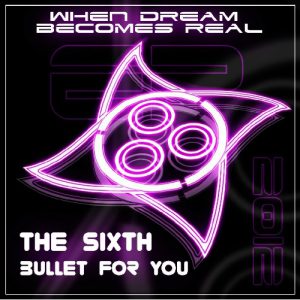 I don’t consider myself a religious person at all. I didn’t have a particularly faithful upbringing, and I’ve always been doubtful of the existence of God, but I would have been willing to embrace the truth if I were to receive some kind of divine revelation. In When Dream Becomes Real, the debut EP from Russian trancecore kiddies The Sixth Bullet For You, I have received that revelation. I have been struck with a divine truth from on high like Paul on the road to Damascus, like the Buddha under the Bodhi tree, like Muhammad before Gabriel in the cave of Hira and Moses before the Burning Bush in the land of Egypt. And I have come to share this truth with all of you.

There is a God, and He has abandoned us.

Until now, I was blissfully unaware of trancecore’s existence, but all of that changed when we received the promo from The Sixth Bullet For You‘s label. This “trancecore” is a mix of mediocre breakdown-reliant metalcore and horrendous 90s trance music. The marriage of Bring Me The Horizon or Attack Attack! with DJ Tiesto sounds unfathomably unlistenable on paper – and make no mistake, it is – but the match does work on some level, as both genres of music are the textbook definition of lazy and formulaic songwriting. While metalcore leans upon the crutch of “breakdowns,” trance has always relied upon “builds” – that one bit in the song where the oontz-oontz drums cut out and the synthesizer arrangements start to build to a cathartic peak, sounding like the sappy climax to a Nicholas Sparks movie and giving all the drugged-out raver kids an opportunity to take a breather from spasmodic dancing and wave their glowsticks in the air. The Sixth Bullet For You has bridged the gap and taken the “best” of both worlds, mixing one breakdown with another on their debut release. Imagine, if you will, antiquated synths over palm-muted chuggachug guitars with generic metalcore screams, broken up by oontz-oontz drums and autotuned clean singing. There is no power in the universe that would consciously allow this mad experiment of music, this veritable abortion of sound, to ever come to fruition.

It has been five days since I first clicked the link to their single “Pray To Me, I’m Famous.” It has been five days since I have known the peace of sleep. Every time I lay my head upon my pillow, I am assaulted with the memory of this eldritch keening. Every time I close my eyes, I bear witness to horrible visions of a Myspace page using Comic Sans as its default font in 2012. I have been playing Reign in Blood on loop for the past fifteen hours, but it isn’t helping – every time there’s a break in the music, my mind creates sappy synthesizer accompaniments of its own volition. Whenever I hear the beginning of “Raining Blood,” there are Hoovers and airy pads where before there were none, and Tom Araya is sounding more and more autotuned by the second. Something has been permanently damaged in my mind, and I can no longer enjoy music of any kind anymore without facing this mental trauma again. No amount of psychological repression is helping, and I fear I may have to commit myself to institutionalization tomorrow before I end my wretched life. Don’t let yourself share my fate.