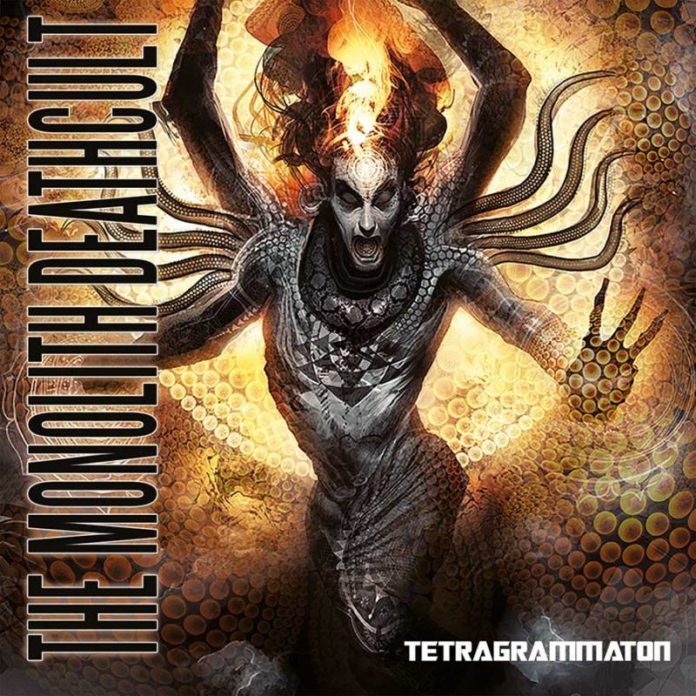 I took one look at this album cover and thought one thing: This is going to be incredibly mediocre. I’m happy to report, that The Monolith Deathcult has proven that initial instinct to be completely false.

With this year being the tenth anniversary of the release of TMD’s first album, the time is definitely right for the band to make some kind of defining statement and, holy hell, this might be it. We’ve all heard some variety of industrial death metal in our travels, but rarely have the two styles been melded so elegantly.  The industrial touches found throughout Tetragrammation are never distracting or overpowering of the primary elements of the compositions. They add an intensity and an aura that makes each song, as well as the album as a whole, unique.

The vocal work on display here is interesting and unique as well. While most of the album obviously employs fairly standard guttural growls, the band also employs punky-thrash rasps, melodic choral lines and black metal shrieks. Despite Despite the use of these different styles, no vocal line feels out of place and nothing takes away from the overall aural effect.

One vocal-related quibble, however, is the overabundance and poor use of narration. This is especially prevalent on the first handful of tracks, as a grainy male voice starts droning on about god knows what over top of the steady, brutal rhythm section. Narration in the middle of songs is one of my pet peeves as it’s something that, while effective when used properly, is very easy to screw-up. Sadly, TMD falls into the latter category. The gentleman is simply distracting, and does nothing but take the listener away from their headbanging for a few confused seconds.

The album could definitely have benefitted from a slightly more focused production. The band is making a brilliant attempt at bringing several disparate stylings into a cohesive whole, but are let down by sloppy knob work surrounding one element that could have really made everything leap from the headphones: lead guitar. The solos are well constructed and fit each song perfectly. But they are produced in such a way that the listener needs to strain to pay attention. They rest at almost the same decibel level as the rhythm guitar, when just a little more volume and clarity could have really made those leads, as well as the surrounding compositions, really pop.

So it’s not perfect. But it’s damned awesome. The Monolith Deathcult has conquered musical ground that has destroyed many other bands, and will undoubtedly claim many more. If you’re a fan of atmospheric, industrial-influenced death metal, consider this a buy or die!