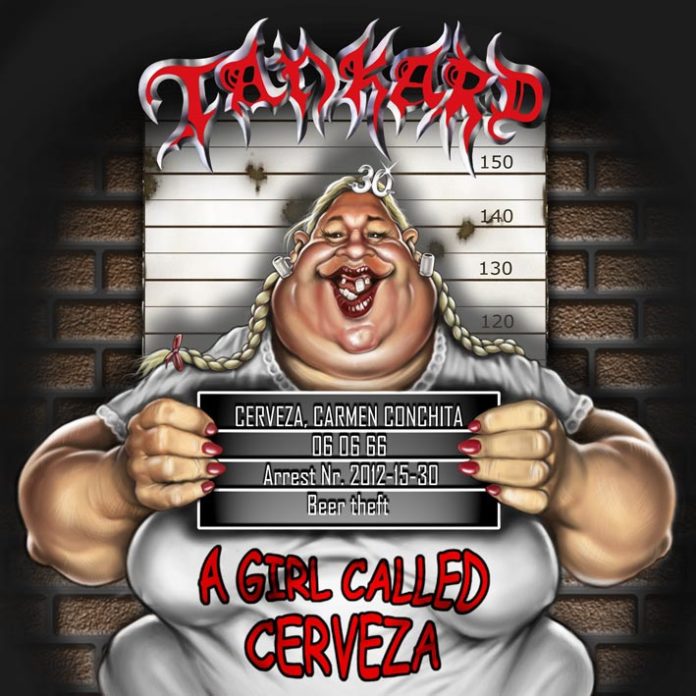 It is hard to imagine that bands can stick around for 30 years and still be hard at work with nothing slowing them down.  This is how Tankard has been able to stay on top of the German thrash metal pyramid by constantly showing themselves to be one of the hardest working bands today.  With an average span of one-to-two years in between new albums, Tankard are back with their 16th full-length, “A Girl Called Cerveza“.  If you weren’t able to gleam what the band is all about from the album title, I’ll let you in on a little secret: they like to binge drink, as well as singing about the dumb things that occur during said binges.  While Tankard may not be putting out Nunslaughter numbers when it comes to material, one can make the argument that taking such little time in putting out new music can drive down a bands stock due to not making the perceived extra effort in making sure it all sounds perfect.

After a few rotations of “A Girl Called Cerveza“, I think that aforementioned argument may hold a good amount of water.  You are treated to ten tracks with a median time of five minutes each, and one would think that is a pretty good bargain for fifty minutes of unadulterated German thrash metal, right?  The problem with this is while the thrash is certainly there, that lengthy song is mainly comprised of repeating the chorus over and over again.  It does not matter to me how many different ways there are to approach with bringing in a chorus, but when it is the main crutch for the majority of an album, it tends to grate on my nerves pretty quickly.  Despite Tankard‘s repeated offenses, they do manage to include a few rockin’ tracks that I really wouldn’t mind hearing again, such as ‘Witch Hunt’, ‘The Metal Lady Boy’ (featuring Doro), and ‘Metal Magnolia’.

I’m sure there are a few of you out there who are reading this and are thinking to yourselves, “c’mon Jon… this is Tankard!  Stop taking it so seriously,” and you know what? I would say you have a point.  Tankard is definitely for those who wish to have nothing more than a good soundtrack for a party; just turn your brains off, pop open a few brewskis and drunkenly ogle at some girls breasts or guys crotch bulge while Andreas Geremia whispers sweet nothings about having sloppy drunken sex with a fat girl.

“A Girl Called Cerveza” certainly does have its fun moments, but overall it really doesn’t go anywhere for most of the time.  Maybe it would help if they took more than one year writing the material rather than doing it all in one weekend and calling it a day.