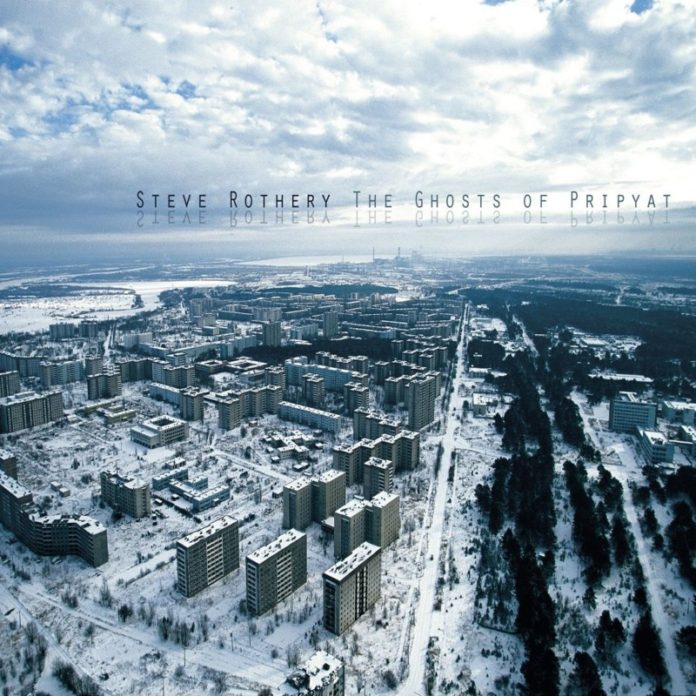 It interesting to see that as the more ancient bands continue to age their members start to go solo, sometimes in an attempt to avoid the clutching grasp of obscurity, other to have a bit more artistic freedom. This time it is Marillion’s Steve Rothery who, while not off the bandwagon just yet, tries his hand at solo work, enlisting feature performances by the likes of Steve Hackett and Steven Wilson for a triple serving of Steves that just drips with progressive goodness.

Perhaps it is the nature of instrumental music, or a testament to Steve Rothery’s ability to create an incredibly smooth flow, that if you look away for even a second The Ghosts of Pripyat can drift right through you. Throughout the whole album Rothery seems to implement the same formula and strategies. Every track begins with a soft ambient piece, sometimes with a heavier focus on the percussion, others centered on the keys and synth with the rest of the elements slowly added in, building up to a climax. All the songs wind down to a conclusion where the various mechanics are slowly stripped away until only the bare basics are left, before they also pack their bags and leave the stage. While this strategy and its constant use does stagnate the sound to some extent, it serves to tie all the music seamlessly together, turning the album into one whole listening experience that can still be broken down into digestible chunks (unlike the one-song-monsters of Jethro Tull’s Thick as a Brick or Echolyn’s Mei). This is a welcome consideration, as I found “White Pass” particularly entrancing and would’ve hated having to skip through twenty minutes of music every time I wanted to listen to it.

As Steve Rothery is a guitarist, there is of course a large emphasis on the guitar work. Fortunately he is good at his job and manages to drive the sound to its destination with broad, overarching notes, speedy portions with a light distort, and intricate acoustics. The production is crisp and clear with a remarkable attention to detail on the layering of the various guitar tracks as they intertwine and build off one another. It is impressive how much emotion and story is conveyed purely through the instrumental work, with only the song and album titles providing any sort of clues for the context. The city of Pripyat, abandoned in 1986 as a result of the Chernobyl disaster; what’s left to roam its deserted streets as the buildings decay and crumble?

The Ghosts of Pripyat is an album that you can be drawn into on some occasions, or at times merely skip over the surface. While repetitive mechanics do hinder the entertainment value, the music progresses in an unimpeded flow towards a logical and planned conclusion that will leave the attentive listener satisfied. The album may not be one to rock out to, but it certainly would provide a suitable soundtrack for a solemn winter day.

An exceptional production with an ample attention to detail in the layering process.
Expert guitar work.
Solid development.
Overused mechanics make for repetitive moments.
Few major hooks to draw the listener in.
4.5