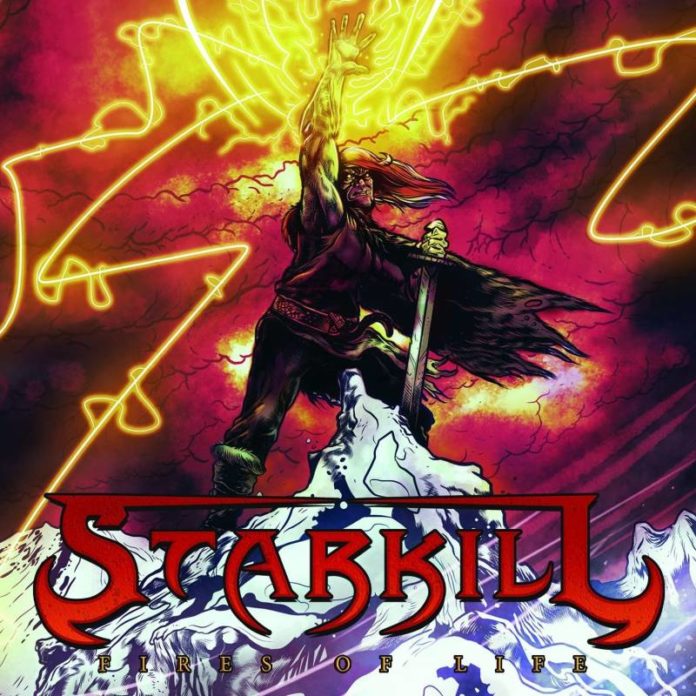 The game of darts is a complex game. And while the rules elude many people, let’s just say it’s not a game about hitting the bull’s eye, it’s about hitting the specific mark that you need at that time; it’s about doing what’s good at the moment. In that sense, Starkill accomplish everything they set out to do with their latest album Fires of Life; a death metal exodus that has the pounding double bass of Behemoth, the slightly satanic piano/synth combo of Dimmu Borgir all the while singing about themes that would make Amon Amarth proud. How could anything go wrong? Well, all I can say is that I wish it had hit a few more bull’s eyes.

While the album has a tight production and a massive drive behind it, it simply wasn’t something that I could get behind. It simply sounds like something that I’ve heard either years before or just a week ago. There were elements in the music that are all too familiar and not unique enough to call one’s own. As a result, I found myself easily distracted and a few songs in, even though Starkill were blazing at full fury, I simply had lost interest. It took me a while to figure out why I just couldn’t get into the album, but then I realized that it wasn’t any particular reason, there simply were too many things that weren’t right with Fires of Life for me to give any more than a half satisfied nod. And while it’s true that there are certain elements that I outright didn’t like, they weren’t entirely problems with Starkill themselves. Indeed, some were, as in the leads in the prechorus of “Whispers of Heresy” simply did nothing for me other than make me wince in agony. Most of my gripes were with the production of Fires of Life. While there wasn’t any real question of the skill behind the band’s ability to play, I found that the most distracting part were the drums. I’m not sure who made the decision, but I couldn’t help but noticing how mechanic they sounded; everything sounded so quantized that all semblance of human feeling was gone from the beginning of the very first track.

Was the album a total loss? Not entirely, throughout Fires of Life one of the only truly satisfying takeaways were the really impressive solos; the album was full of constant harmonics, dive bombs, and sweeps. And while the choruses were nothing to write home about, the vocals were of pretty great quality. I just wish there were more positive things to write about, I was so jazzed from the moment of looking at the front cover, it looked like something straight out of a Conan the Barbarian comic book, it just didn’t live up to expectations. But maybe this was just part of the first album jitters? Many expert bands including Anthrax and Dream Theater suffered from those very same problems and came out better for it in the long run. Could this be the very same case for Starkill? Only time will truly tell.

Take what you will from this review, but Fires of Life didn’t do much for me; if it wasn’t the drums ruining things for me, it was the lack of uniqueness that bothered me. If you’ve listened to any European death metal in the last year, particularly the releases from Dark Tranquility and Before the Dawn, you’ll most likely be unimpressed and have a hard time with really digging into Fires of Life. But while the album didn’t speak to me, it very well may speak to those of you who have a yearning to hear blackened death with more of a power metal lead.