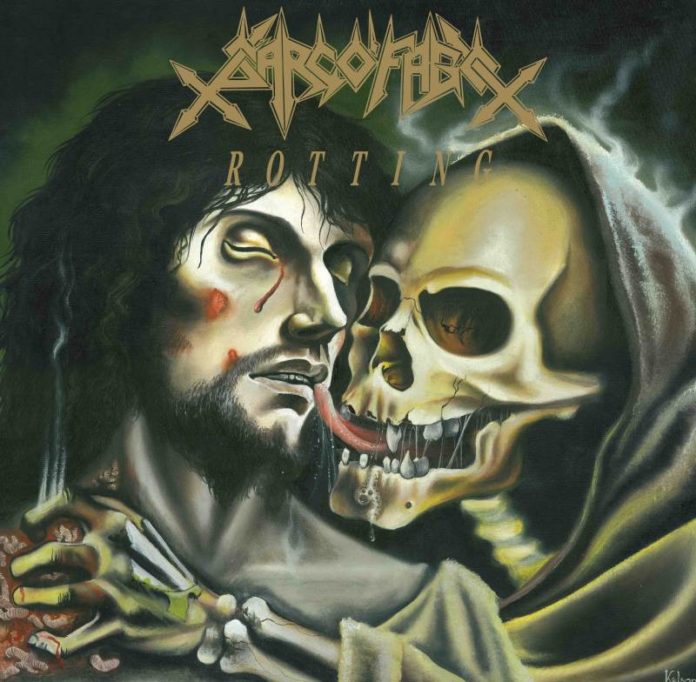 I’ve always found Sarcófago‘s place in metal history to be an interesting one; after all, mainman Wagner “Antichrist” LaMounier was an original member of Sepultura and was involved in the creation of their early style. But while Sepultura gradually shifted their sound away from black metal (moving to the greener pastures of thrash and, ultimately, to a brief but massive mainstream success), Wagner formed Sarcófago and became arguably the second true black metal band operating outside of Europe in the heady days of the late 80s; a continuation and evolution of Sepultura‘s Morbid Visions-era aesthetic.

Having been recently re-issued by Greyhaze Records, the band’s ’89 EP Rotting has stood the test of time as their crowning achievement. Although tor a re-issue it’s pretty scant with extras or revisions, it’s perfect for a vinyl release, as bonus tracks might, to me, sully the overall chemistry and feel of the album. I feel that a re-issue on the original intended format should attempt to stick fairly close to the original intended product; then again, I don’t yet own a hard copy of this, which makes it more desirable than it would for someone who picked it up in the last 25 years.

Musically what you get is fierce, raw, violent blackened thrash with no great purpose or intent beyond total disintegration. Although the lyrics are not squarely satanic, they are entirely blasphemous, soaked in alcohol and sodomy. The fantastic, rusted guitar sound and the barked vocals were fairly unique for the time, sitting at the intersection of all things black, thrash, and death metal.

For this re-issue they’ve cleaned up the mix, and while it’s only a slight alteration, mostly with regard to the vocals and drums, it is an improvement over the original. With the coat of mud that sullied the vocals gone, Wagner‘s performance is that much more engrossing, and the drums now attack with full force. There are hints of reverb and echo, making the percussion sound cavernous, surrounding the listener more fully and dragging them in to the record.

Of course, like with any re-issue, one of the key questions is whether it is worth buying again/now. Unfortunately, while Rotting is a great release and continues to be worth any metalhead’s time, there isn’t enough incentive for those who already have it to go out and pick it up again. For those who don’t own it, this is an essential listening for fans of extreme thrash and raw, no-bullshit black metal. It’s a historically significant piece for its place in South America’s extreme metal tradition, and it’s a damn fine collection of songs to boot.

should have received a perfect 5, top score, this is an amazing album.