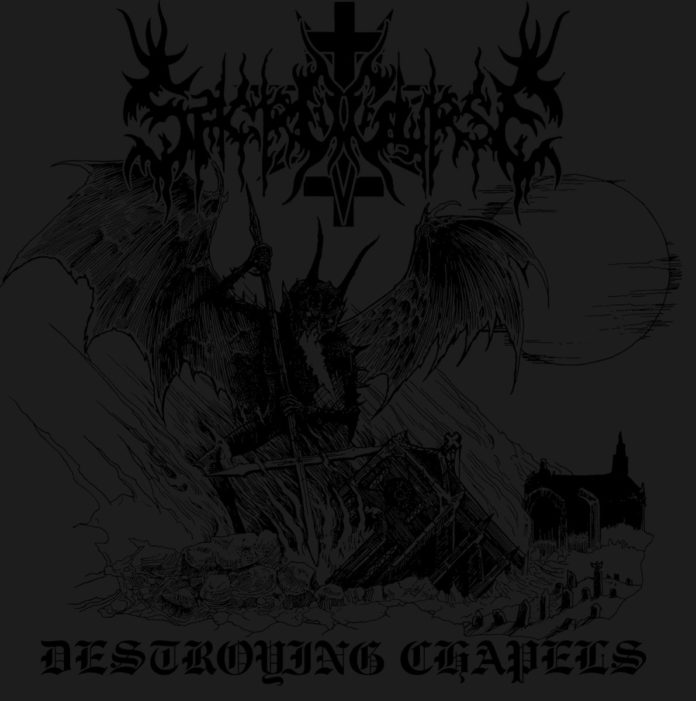 In an ever-changing environment where supposedly “evil” and “anti-Christian” extreme metal bands are trading in their spiked bracers and blood-soaked bullet belts for manbuns and skinny designer jeans, Sacrocurse have been perfecting an intensely visceral, filthy, and at times primitive form of black/death metal. The kind that can only exist deep within the underground.  Having only been around for three years, this group of barbarians have made their calls to war greatly known with an impressive debut in Unholier Master, and they are once again at the helm, willing and ready to exterminate the religious scourge that torments our existence with a new auditory attack in Destroying Chapels.

Comprised of only four tracks, Destroying Chapels makes sure to give your ears a pounding with tons of razor-sharp riffs, pounding drums, barked-and-shrieked vocals with tons of reverb, and enough feedback to give Sacrocurse a powerful atmosphere. The infusion of old-school death metal with black metal aesthetic works incredibly well in all of the tracks, particularly right out of the gate with “Total Devastation”.  However, they aren’t afraid of using a slightly groovier, yet still uncompromising ferocity in “Sacrocurse Temple”, which is the perfect lead-up to the real winner of this EP, title track “Destroying Chapels”.  This song is exactly what I want out of my extreme metal bands: a relentless, punishing exercise in brutality. There’s absolutely no mistaking the voracious contempt that is being conjured, and it takes an incredible physical toll since all you want to do is form a one-man moshpit and destroy everything in your apartment. Sacrocurse even managed to put their own pretty cool spin on the Bathory classic “Total Destruction,” recorded in as minimalist a fashion as possible, with the exception of some portions of layered vocals.

All in all, if you have fifteen minutes to spare in order to get a quick fix of crushing black/death metal, there’s no possible way that you can go wrong with Destroying Chapels. Sacrocurse was already on my radar from previous recordings, but this EP has really made me eager to see where they go from here. If you are already familiar with bands like Black Witchery, Diocletian, Impiety, or Cult of Fire, then I implore… no, I beg you, go purchase this EP and experience Sacrocurse in their most distilled and blasphemous form.

The Crown – Death Is Not Dead