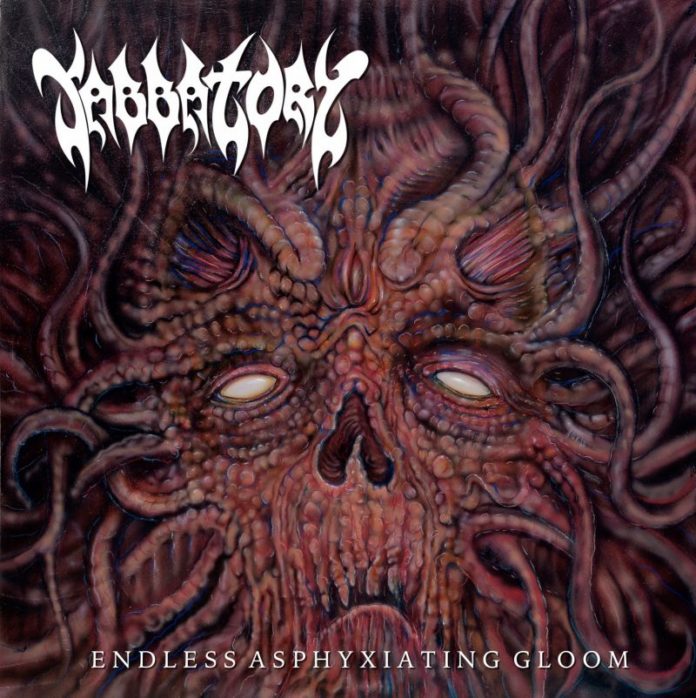 Despite their short time together, Canadian quartet Sabbatory have established themselves as one of the most promising new acts in the modern sphere. Boasting solid technical proficiency, they released an outstanding demo back in 2012, that left many wanting for more. Now, 2 years later, they’ve taken heed to the demands from their fans, unleashing their debut full-length, Endless Asphyxiating Gloom, in the hopes that it will live up to the expectations.

The album instantly kicks into gear with ‘Being, Thy Eternal Perplexor’, revving up the motors with a flurrying storm of d-beat drumming, and a gloomy cloud of morbid growls soaring over jagged guitars. The band’s reverence of the classics is obvious from the get-go, as you can hear the rugged riffs of Replusion, the bulldozing speed of Death and the decrepit atmosphere of Celtic Frost, all rolled into one homogenous, grotesque beast. They do show a wider range of influences outside the old-school death metal spectrum on tracks like ‘Hypnotic Regression’, calling back to grind and crossover thrash, often slowing to chunky grooves and beefy breakdown sections before tearing out another scalding solo. Sabbatory’s influences are clear, and with Endless they fuse together a broad array of closely-knit genres into a natural, organic sound, amplified even more by the their fantastic chemistry and musicianship. It’s 100% pure, on-point talent, in particular drummer Dan Earle Ryckman, whose attention-grabbing proficiency is truly spectacular, tying the songs together superbly and acting as the real driving force of the band with his brutal precision.

There’s no denying that Endless is a superbly-crafted record. The riffs are all crushing and memorable, the drumming is both swift and mighty, and the vocals are monstrous. But the reason why it resonates so much is because it reminds you of the classics;this makes you wonder whether you’re enjoying the songs or just enjoying thirty years of death metal history. It works because it’s all been done before. There’s nothing wrong with taking cues from your influences, but even though there is a lot of variation in the album, it’s all drawn from the established classics whose influence can be spotted almost everywhere. Even the name choices can set off alarm bells, with nods to Asphyx and Sabbat acting as your first impression of the band. That’s why the issues with Endless aren’t rooted in the songs, but in the band itself. It wouldn’t be too much to ask for Sabbatory to add some more experimentation to their next record. Add some more inventive riffs, some original lyrical themes, anything that’ll make them stand out from their contemporaries!

Don’t let this deter you. Even if Sabbatory’s worship of old-school bands prevents them from bringing any new ideas to the table, the broad synthesis of influences, combined with the impeccable musicianship, creates an astonishingly blistering 35-minute thrill-ride. The dynamic pace of the songs, along with the relatively brief runtime of the album, makes for super-addictive listening that is recommended for both newcomers and seasoned death metallers.