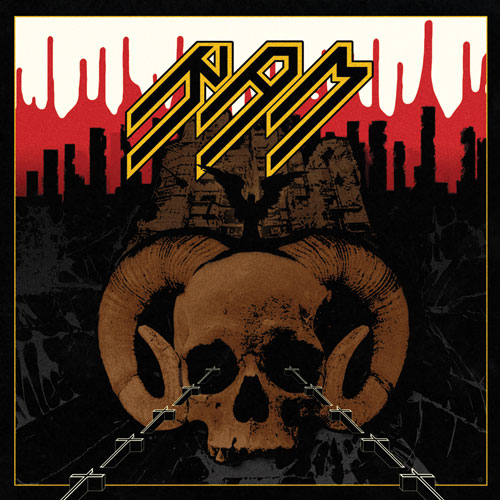 Fronted by Axl Rose’s unofficial body double, Oscar Carlquist, Ram offers its own take on heavy metal of the NWOBHM kind, in a manner that will constantly remind you (in a good way) of bands like Iron Maiden and Judas Priest.

The album shines for its riffs. Songs like “Comes from the Mouth Beyond” and “Release me” feature a flawless lead guitar; although it’s definitely classic heavy metal, it’s played in a much more aggressive manner, making it something akin to Saxon on a cocaine binge. Something similar happens in “1771” and “Flame of the Tyrant”, where the riffs almost make it mandatory to headbang, with a rhythm that overflows with energy and power.
Carlquist’s vocals will be a delight for fans of Accept, and UDO. “Under the Scythe”, a frenzied and powerful tune, seems to have been made to highlight his great vocal abilities as well as the potential of his voice; something similar happens with “Flames of the Tyrant” (with more than a pinch of speed metal) where he almost overshadows the instruments.

Death is full of songs reminiscent of the in-your-face, balls to the wall metal of the 80s, a characteristic that is both its strength and its weakness. While this album does a terrific job in bringing back the classic heavy metal sound, which will be welcomed by some of the “TRVE METAL FANS” (remember to make an “x” with your forearms and wear a cut-off denim jacket) as well as some of the old schoolers in the scene, the album does lack some creativity.  True, the constant homage to the classics is done in an exemplary fashion, managing to preserve their own sound while, at the same time, clearly showing their influences; however, at times they also seem reluctant to take a risk and depart from that sound. There problem with a new band playing an older style of music is that they run the risk of sounding outdated, something that does affect Ram in some occasions.

The bottom line is that this is a truly enjoyable album if you have a special place in your heart of Iron Maiden, Judas Priest and Dio (and you should!). If you don’t, you might as well take a pass on this one.