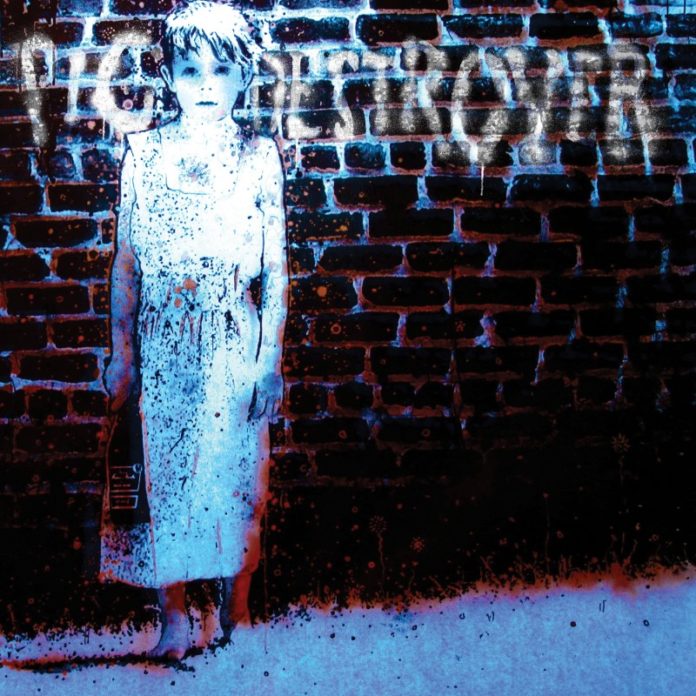 One of America’s premier grindcore bands, Pig Destroyer, is back with a vengeance.  Over the years we have come to expect nothing less than grindcore that is packed to the brim with ultraviolence and overwhelming despondency to all that surrounds them.  There is very little I need to say here, because once it is known that “Book Burner” was created by Pig Destroyer, then you’ll realize that the music will say far more than I ever could.  Enough of the bullshit.  Let’s grind!

For nearly 32 minutes you are pummeled and beaten by the blistering pace of Scott Hull’s (Agoraphobic Nosebleed) riff mastery, which still makes him the centerpiece of Pig Destroyer.  Not only do I mention Scott’s work, but Adam Jarvis (drums; Misery Index, All Will Fall), Blake Harrison (noise and samples), and J.R. Hayes (vocals) work wonderfully together as always.  “Book Burner” may be thought of as just another ridiculously good grindcore album from these stalwarts of the sub-genre, but Pig Destroyer has created more than that.  The sound of “Book Burner” is still firmly rooted in the grindcore sound, but it almost seems more… subdued, if you will.  Because of this it gives the band a chance to create some really interesting and groovy sections in some of the longer songs like ‘The Diplomat’, ‘Baltimore Strangler’, ‘The Bug’, and ‘Permanent Funeral’.

While those longer-than-average songs are ridiculously heavy and memorable, I would have to say that it is still the shorter and penetrative songs like ‘Sis’, ‘The American’s Head’, ‘The Underground Man’, ‘Machiavellian’, ‘Burning Palm’, and ‘Kamikaze Heart’ (a personal favorite) that make “Book Burner” one for the ages.  Each song is filled with multiple guitar layers to make up for the lack of a bassist, and it works perfectly in order to drive the point home that you are being repeatedly punched in the face by Pig Destroyer.  There are also some guest appearances to be made on this album that consists of Katherine “Kat” Katz (Agoraphobic Nosebleed) performing her shrieking on ‘Eve’ and ‘The Bug’, and Jason Netherton (Misery Index, ex-Dying Fetus) throwing in his vocals during ‘The Diplomat’.

I’ve already mentioned the multiple layers of guitar, but to add onto the wonderful production values is that Scott Hull did all of the mixing and mastering himself.  Who better to do that stuff other than the main man behind the project in the first place?  Scott knows exactly how everything should sound and makes each instrument compliment one another perfectly.

For a moment I would like to break down the fourth wall here and provide a little bit of insight to what “Book Burner” may actually mean.  We all know that a large portion of heavy metal musicians are no fans of religion.  When I was first given this promo by Relapse Records, there is a PDF file in there with a story that was written by J.R. Hayes, entitled “The Atheist“.  I won’t divulge what it is about since I am hoping it will be included with the purchase of this album, but the best way I can describe it is mixing Cormac McCarthy’s The Road with dangerous religious indoctrination.  I had never seen something like this be attached to an album, but in the case of “Book Burner“, I am very glad that it is included.

It may have been a while since Pig Destroyer has released any material, it appears that they haven’t missed one step with “Book Burner“.  These grindcore veterans show that they are to never be counted out, and not that they ever were, but they help to solidify their position in being instrumental to musical aggression that originates from America.  The sheer ferocity that lies within this album is one that will be played for many years to come, and has quickly shot up to be my favorite Pig Destroyer album.  I’m not sure if I will love it more than I do “Agorapocalypse” by Agoraphobic Nosebleed, but who knows over time?  But really, if you are a fan of grindcore in any fashion, then I highly suggest you pick up “Book Burner“, as it is easily a contender for best album of 2012.