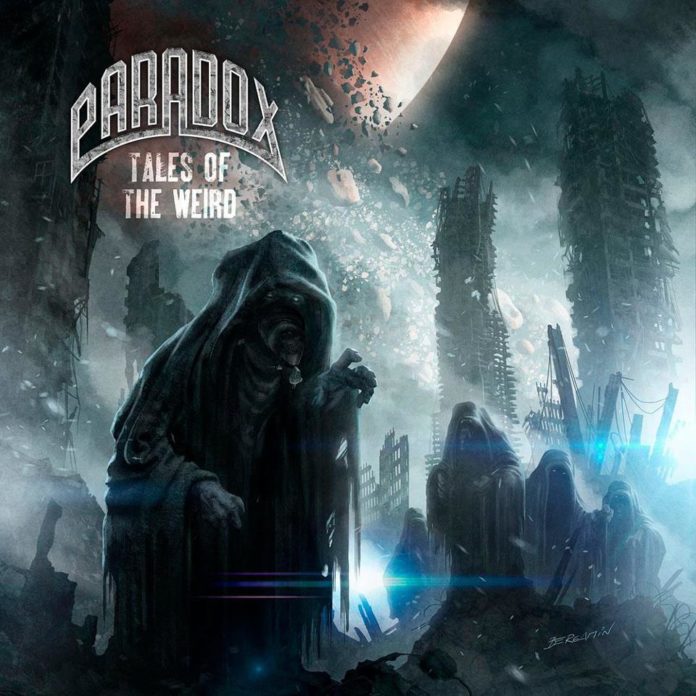 There’s been a great deal of turbulence in Paradox‘s career. Constant splits and personnel changes might have knocked many other bands out of the rails, but these German veterans are persistent and are still playing the music they have believed in for all these years. Tales of the Weird is a result of this perseverance and the mileage not many bands nowadays can brag about.

The album starts off with the title track, a 9-minute top-shelf progressive thrash metal tune. It initially struck me as an interesting blend of Thunderstone‘s melodic metal approach and bay-area style thundering riffs. There’s a fine balance in number between the somewhat typical thrash metal tracks and the heavy metal oriented ones. Some of the finer thrash tunes include the furious “Day of Judgement” and “Brutalized,” which features a great and subtle acoustic riff in the chorus. There are some really nice, heavy moments on the album, like the powerful “Fragile Alliance” or “Slashdead,” a track reminiscent of Iced Earth‘s Stormrider-era works. Also worth mentioning is the amazing, heavy cover of Rainbow’s A Light in the Black, which wraps the album up. The album has an old-school vibe to it, especially the guitar sound. The sound and the stylistic variety of the solo guitars are also impressive, ranging from the technical solo in “Brutalized” to the oriental-style highlight of the “Tales of the Weird.” There are also a lot of acoustic guitars utilized on the album, and they certainly add to the overall sentiment and the distinctiveness of the record. The album’s weakest point is that it is made up of half great tracks and half fillers. Specifically, the thrash tracks tend to get repetitive, and by the time you get to “Escalation” or “The Downward Spiral,” you’ll have the feeling that you have heard them at the beginning already. The other complaint is that the album can be clearly divided into the power metal tracks and the thrash metal tracks. Should they have mixed the styles more, it would have made the songs much more versatile, unique and enjoyable.

Overall, Paradox did a very fine job on this one and apart from a few complaints, regarding the songwriting of the faster tracks, the band has come really close to writing an album of their career, and one that wider audiences would enjoy. If they should follow in these footsteps, the next release might prove to be the one that brings the renown these veterans surely deserve in the 21st century.