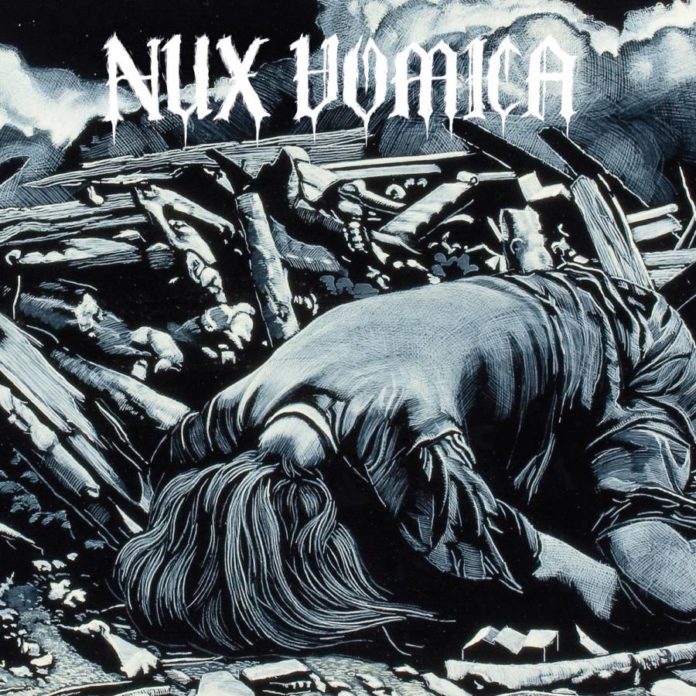 Some bands are content with finding their niche and spending their entire careers in it. They might write the same song every time, but they do it so well that you’re not prone to care. Others find the box of a single sound or genre too constraining, and seek to meld as many disparate sonic elements into their recordings as possible. Lesser bands will take on this task with all the finesse and aesthetic sense of a hyperactive five-year-old at the sundae bar, but when a group has a clear vision and sense of purpose without overextending themselves in the process, the result can be something special. Case in point, the most recent release from Nux Vomica.

This is an album that one would classify as post-metal, but only because its sound straddles across so many genres that it’s impossible for anyone to pin it down. An immediate comparison would be early Neurosis, purely for the breadth of compositional style on display. The album sprawls across three 10+ minute tracks that flit between crusty d-beat gallops, soaring crescendos drenched with e-bows, and pummeling sludge anthems. Where the album distinguishes itself from its influence is with its crust-punk sensibilities. The songs are prone to launch into a full-on hardcore fury at the drop of a hat, and as indulgent as the more atmospheric passages can be, they only last for as long as they need to. For three songs lasting more than ten minutes, and one even coming close to twenty, there’s very little fat to be found.

The album requires patience to appreciate, but the band does a good job of making listening not seem like a chore. The slow atmospheric build of “Choked at the Roots” cements it as a highlight, but that’s not to say the other tracks aren’t pulling their weight. The epic song length makes this not an album of songs, but an album of moments – the initial menacing bass plucks of “Reeling,” the way “Choked” explodes into hardcore fury once it can’t soar any higher, the film samples that bubble up to the surface of the closing sludgy swamp on “Sanity is for the Passive,” and I could really go on forever. They cover the piece like ripe fruit on blossoming trees, or to use a more metal analogy, boils on a plague victim. And they don’t just stand on their own; they all blend together into a satisfying blend of atmospheric sludge’s vastness and hardcore punk’s immediacy. Paradoxically, the faster d-beat passages are the ones which are prone to keep treading water after their welcome has been worn out; the atmospheric segments always have a sense of momentum to them. But the band knows that a listener’s interest is not something to take for granted, so the songs always have a final destination in mind.

I feel that this style of metal is overly prone to result in either aimless tedium, or something that’s such a conceptual mess of haphazardly-blended musical styles that it’s impossible to digest. Much like a five-year-old’s nightmarish sundae creation, the foundation’s been too buried in unnecessary bells and whistles that have been piled on until what’s left is something destined to have you running for the toilet in short order. It’s remarkable on its own when a band is able to avoid these pitfalls, but it’s even more notable when the band can craft something that’s worth listening to as not just a collection of well-crafted songs, but a cohesive and rewarding album. For the most part, Nux Vomica have succeeded with their most recent release, and whatever they put out next is sure to be even more impressive.