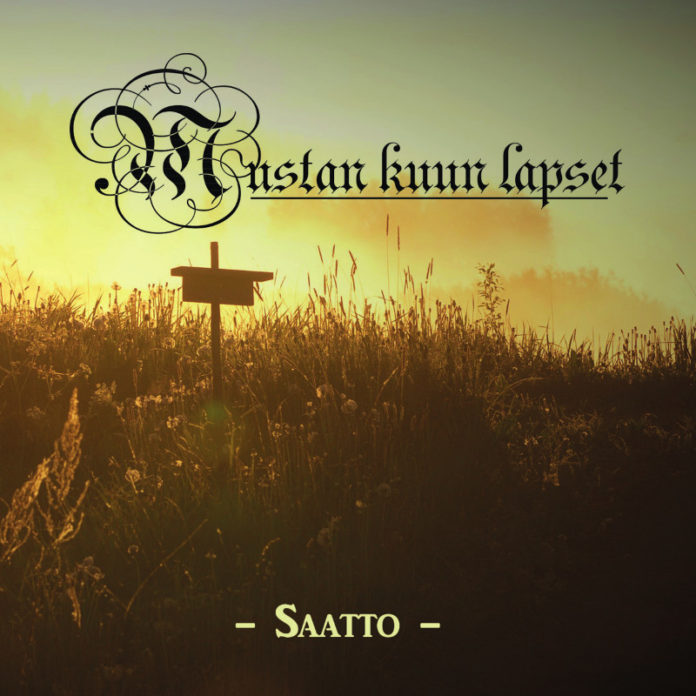 As the band retired about a decade ago, the appearance of a new album from the Finnish outfit of Mustan Kuun Lapset (MKL) comes as more than a slight surprise.  And with nearly an hour’s worth of music assembled for Saatto, the band has tried to provide a thorough sense of what they’re like these days, blending theatrical death metal with a Gothic heaviness that doesn’t quite venture into doom territory.

Rough, gargle-growled vocals add a blackened touch, but the music is largely trim and clean, with mixing that aims for slick elegance instead of frost-bitten rawness.  The arrangements have a similar character, with melodies that, for all the gnarliness put into the guitar’s tone, are easy to catch onto and follow. Even though the drums seem oddly subdued in the mix, they retain enough impact in the low end of the register to generate firm propulsion.

I imagine this stylistic mix will make the album something of a slow burn for many listeners, but there’s also a considerable amount of substance to be enjoyed once they warm up to it.  “Cilice”, in particular, feels like a song that could hold up well for years to come with the care put into establishing and developing its main riff; “Sudenilma” runs a similar course, but feels a little thinner in comparison, due to its positioning immediately after the more impressive track.  And with the two-part penultimate tracks of “Valkoinen Satama – Haaksi” and “Valkoinen Satama – Tyven” leading to the ~9-minute title track closer (which leans a little into power metal to bolster its semi-epic vibe), there’s clear effort being put towards leaving listeners with a lingering sense of grandiosity at the end of the album.

For a band looking to make a good impression after ten years away, Saatto is a very respectable effort.  It has a focused style, clear character without being over-bearing, tasty riffs and shreds, and a structuring of the track content (when considering the album as a whole) that speaks to the efforts in making the individual tracks link together.  Although a decade is a considerable amount of time to expect old fans to just jump back on-board, and assuming the album gets the exposure it deserves, MKL should be picking up enough new listeners to minimize that problem.

IN A NUTSHELL
Certainly worth checking out, but be sure to give it a second go after letting the first listen settle in your mind
Reader Rating2 Votes
POSITIVES
Nice variety
Good melodic development
Strong album structuring
Surprisingly few stumbles for a band getting back into it after such a lengthy hiatus
NEGATIVES
The drums feel somewhat bloodless at times
Some brief interludes would have helped alleviate the undercutting that comes from running some similar tracks back-to-back
The stagy presentation of some segments can be off-putting
4