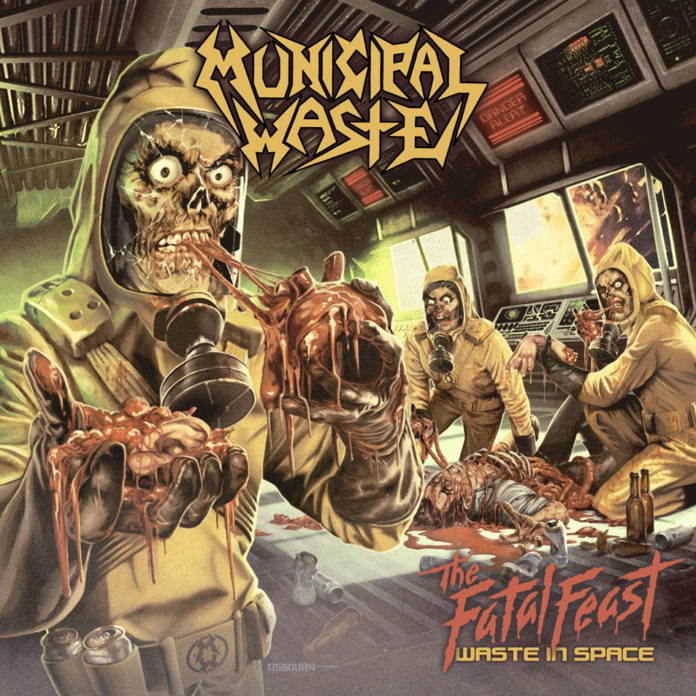 I can’t remember how many fantastic parties I’ve been to that have been soundtracked by Municipal Waste. Cuts like “Unleash The Bastards” and “Born To Party” thrash like little else on the planet, and are absolutely perfect for making a good time even better. In an underground music scene that often takes itself far too seriously, their irreverent brand of crossover thrash has always felt like a breath of fresh air.* Straight from the perpetually circle-pitting scene that birthed legends like D.R.I. and Suicidal Tendencies, they’ve been flying the crossover flag high for the past eleven years, with a slew of EPs and splits and four excellent full-lengths to show for it. And while many bands seem to run out of steam once they’ve been a unit for a double-digit lifespan, The Fatal Feast proves beyond a shadow of a doubt that the Waste is as strong a unit as ever.

It would be easy to think otherwise after 2009’s Massive Aggressive, which lacked a lot of their trademark humor and enthusiasm in favor of a more serious-minded lyrical approach. While sporting a few choice cuts a lot of the album was pretty indistinguishable, far removed from the energetic highs of Waste ‘Em All and the excellent Hazardous Mutation. And it’s an absolute joy to see Municipal Waste back on top with their latest offering – the thrashy riffs are as wicked-fast and invigorating as ever, with shred-tastic leads from Ryan Waste, a relentlessly driving d-beat from Dave Witte, and a scuzzy bottom-end bass from Landphil. Lyrics, delivered in a snot-nosed sneer from frontman Tony Foresta and punctuated by sing-along group chants, are back to the welcome Waste standards of B-horror schlock and irresponsible partying behavior. There’s a song about aliens bursting out of your chest (“Crushing Chest Wound”), drinking to excess – told from the point of view of both imbiber and bartender, no less! (“Covered In Sick/The Barfer” and “You’re Cut Off,” respectively) – and the title track, an interstellar cannibalistic romp introduced with an eerie 80s-style horror-synth that easily cements itself as the album’s standout cut. It’s impressive to see how the band’s been able to cram this much high-octane fun into an album that runs just shy of forty minutes, but that’s crossover for you.

Municipal Waste is far too easy to dismiss. Sure, you could just write them off as a “dumb party band,” but that’d be doing them a pretty big disservice. Their songs are well-constructed, take some major chops to play, and are wicked fun above all else. And isn’t having fun what listening to music’s supposed to be all about? It’s far too easy for us metalheads to forget that – especially someone like me who listens to so much black and doom metal – and sometimes we’ll need a tongue-in-cheek romp like The Fatal Feast to show us that, once in a while, it’s perfectly okay to knock back a few more shots and fire off the confetti cannons.

*About as fresh as a breath of air can feel when it’s reeking of whiskey, anyway.