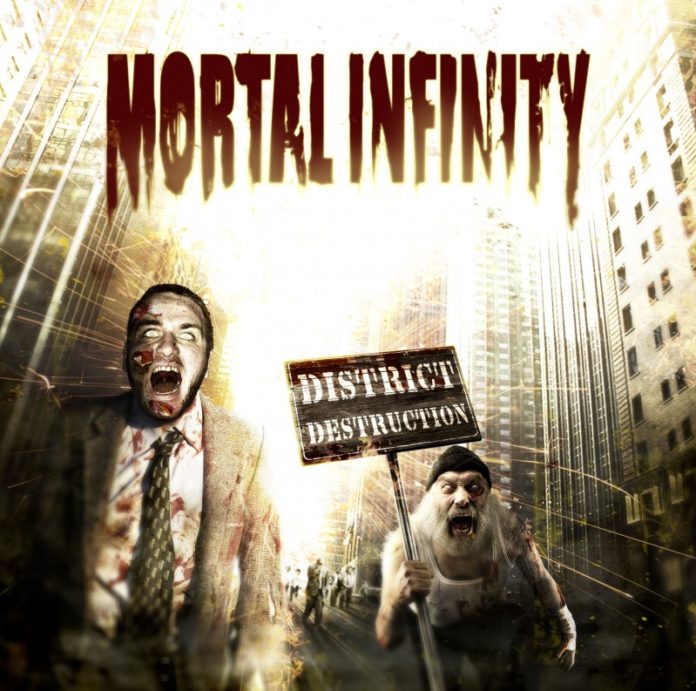 There are certain bands that defy genres and certain bands that just fit perfectly into their definitions. If there was any doubt over what particular brand of thrash Mortal Infinity was, all you need to picture is a group of Germans that have based their entire existence on the 30 second chugging-bridges of Reign in Blood. But however condescending that sounds, it’s actually the opposite of the fact; the best parts of District Destruction are indeed the crossover type mid tempo breakdowns, the slow single string galloping really feels like a mosh pit waiting to happen. But for whatever it gets right, the album fails to make any real impact, the riffs becoming generic, leaving more to be desired from the latest entry into an oversaturated genre.

After a rather nice acoustic intro the album opens solidly enough with “Thrill to Kill”  I’m immediately whisked away, reminded of Slayer, Agnostic Front, Living Sacrifice.  It’s by no means bad; in fact, Mortal Infinity is an impressively tight band, and in that sense take more of a queue from their Teutonic brothers, rather than their looser American counterparts. The album is full of catchy riffs; the openers to “Trill to Kill” “At Dawn of Death” “Wake of Devastation” are all awesome in their own right. “District Destruction” itself deserves its own mention as the sheer “Angel of Death” ride cymbal technique just asks to be noticed. In this respect, Mortal Infinity does everything that they set out to do.

Alas, not everything the group sets out to do ends off well. While the intro and bridge riffs are always catchy, the verse riffs are often times bland and generic, with the bridge riffs functioning as an aural defibrillator, shocking you awake when you were about to fall asleep.  It’s in this that the album fails to deliver; generic riffs that I’ve heard too often that at times go on for far too long. The vocals are also a deciding factor; for those amongst you who enjoy your thrash with a little more of a hard edge to it, it may be fine but it will almost always fall short. The vocals, though gritty and rough, lack any real dynamic range. Often times, I’ve completely zoned them out, forgetting altogether that they were even being sung. It’s strange, because usually the reason for the gritty vocals is to grab the attention of the listener, but in this case just falls flat.

I really wish that this album did grab my attention more, but it just seems like an unfocused mediocre offering, despite the multiple listens. However, regardless whatever review I give it, Mortal Infinity have proven themselves to be more than apt at creating material, it just needs to be more focused in the future, with shorter and sweeter songs; cut the fat and you’re left with a lean album. Atkins for metal, I guess.