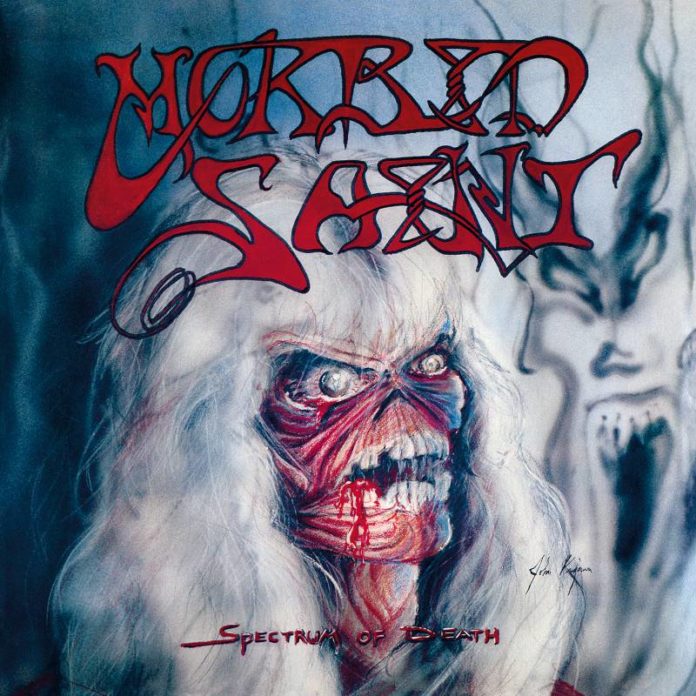 Morbid Saint are a band that really should have become a household name in the mid-80s-90s death/thrash scene. Often chosen as favored openers for the likes of Death and Dark Angel, Morbid Saint had only one proper release, Spectrum Of Death, and planned on a second album entitled Destruction System. Unfortunately, Destruction System was abandoned before it was fully realized, and Morbid Saint called it a day in 1993. After remaining dormant for 17 years, the metal gods smiled upon us, and Morbid Saint reformed, albeit with an altered lineup, with lead-guitarist Jay Visser being the sole original member.

After signing with Century Media, Morbid Saint have blessed the faithful with Spectrum Of Death (Extended Edition), a comprehensive 2 disc set that includes (you guessed it) Spectrum Of Death, as well as basically everything else the band has ever recorded.  Disc one contains Spectrum Of Death, and a previously unreleased 4 track demo recorded in 1992. Right from the very beginning, Morbid Saint grab your attention with “Lock Up Your Children,” a punishing tune with riffs that could rival anything put out by Slayer. Vocalist Pat Lind has a menacing, somewhat high-pitched snarl that reminds me of Kreator’s frontman, Mille Petrozza, giving the tunes a harsher edge than your average thrash band. The audio on the Spectrum Of Death tracks is mostly unaltered, preserving the original tone of the record, which is a stroke of genius. The album was originally recorded in 1988, and the reverb-heavy tone is part of its charm, so it would be a shame to tamper with it, really. The unreleased demo tracks have a really raw sound, though you can tell that the audio has been cleaned up a bit. When you compare the demo version of “Destruction System” to the version found on disc 2 of this collection, you’ll notice a tempo and pitch change. It’s a subtle difference, but definitely something cool for fans to check out.

Disc 2 contains a rough-mix of the fabled second album, Destruction System, as well as some newer tracks that were recorded when Morbid Saint reformed in 2010. Destruction System has a slightly heavier feel, with some more mid-paced riffs at times, such as the opening riff on “Depth Of Sanity.” Lind’s vocals have a little more of blackened edge to them on these tracks (think Toxic Holocaust), which add to the heaviness and intensity. The guitars also sound like they’re down-tuned, particularly on “Living Misery,” which has a groove-metal vibe, and is a particular favorite of mine. The 4 newer tracks have a noticeably different tone, though it doesn’t necessarily make the album sound disjointed, which is a testament to the band’s consistent tone, as well as a nod to the solid production. “Death Before Dawn” and “Thrashaholic” are the stronger tracks of the new batch, and left me hungry for more.

The production on this record is brilliant; leaving the original Spectrum Of Death tracks largely untouched really did them justice. The rest of the songs have been cleaned up enough so that you get some clarity, but don’t come off as overly processed. You can tell the newer tracks were recorded in different sessions, but again, the mixing and mastering of the album as a whole is done well enough that it’s not a distraction. Long-time fans of Morbid Saint will be pleased to get their hands on the official version of some of these tracks (there are a number of shoddy bootlegs on the market), and new fans of thrash will do well to pick this up also.

IN A NUTSHELL
Essential thrash from a band that will please long-time fans, as well as gain a horde of new ones
POSITIVES
Great mixing and mastering breathes new life into some old tracks
NEGATIVES
A couple of the newer songs don't quite stand up to the older material
If you're looking for a full remix and remaster of the original Spectrum Of Death, you may be disappointed
4.5