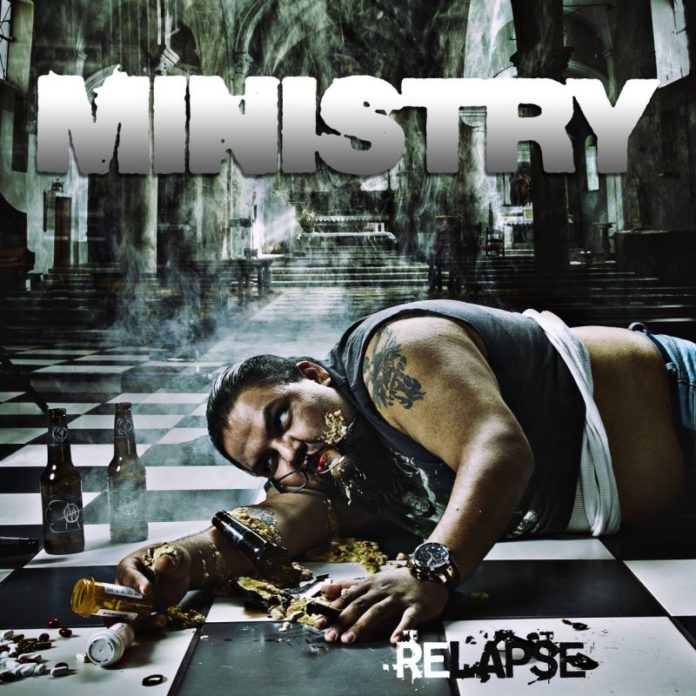 Despite all of his previous statements to the contrary, Al Jourgensen is back with Relapse, the long-awaited return of Ministry.

The album opens with a rant by Jourgensen about how he has been screwed over by “managers, ex managers, ex wives, ex band mates, lawyers, tax attorneys…”, in a way reminiscent of South Park. The whole tirade seems not only erratic but even downright hilarious (not to mention that Jourgensen sounds, perhaps deliberately, intoxicated) especially when he blames the music business for the deaths of Kurt Cobain, Jim Morrison and even Amy Winehouse, as if they had been forced by the man to do the truckloads of drugs they did.

While songs like “Ghouldiggers” (yes, the one with the odd tirade) , “Double Tap” (a new Bush-themed song, which is 100% Ministry, with little to envy from the band’s old days ) and “Kleptocracy” , show some of the power that emanated from the band back in the day, with songs such as “Lies, Lies, Lies” or “N.W.O.“, the album fails to live up to the expectations of the many fans of Ministry (and I count myself among them).

In terms of political messages (which Jourgensen has been known for, e.g. with his participation in Rock Against Bush and songs like “Señor Peligro”, or even “Lies, Lies, Lies”, voicing less-than-popular conspiracy theories) the album sounds like the kind of thing you’d expect from a 16 year old pothead who just discovered Che Guevara. While the idea behind “Git up, Get out and Vote” may be a positive one (register and vote) the execution is far from ideal. While the melody is powerful (the way only Ministry can do it) and the samples are more than appropriate, the song is repetitive in a way that goes beyond that which is expected in industrial music. Something similar happens with “99 Percenters”, a song that although caters to a wide audience (the “Occupy” was, for better or for worse, fairly popular) also sounds boring and downright annoying.

It might be that I was just expecting too much from good ol’ Al. One of the problems of being a fan is that you’re always hoping that they’re going to outdo themselves with every new album, something that is very hard (if not downright impossible) to do. Relapse is not a bad album, but it’s definitely not one of Ministry‘s finest.

I’m looking forward to see the way in which the band will present this new work live and, of course, I hope that their next work will be better.