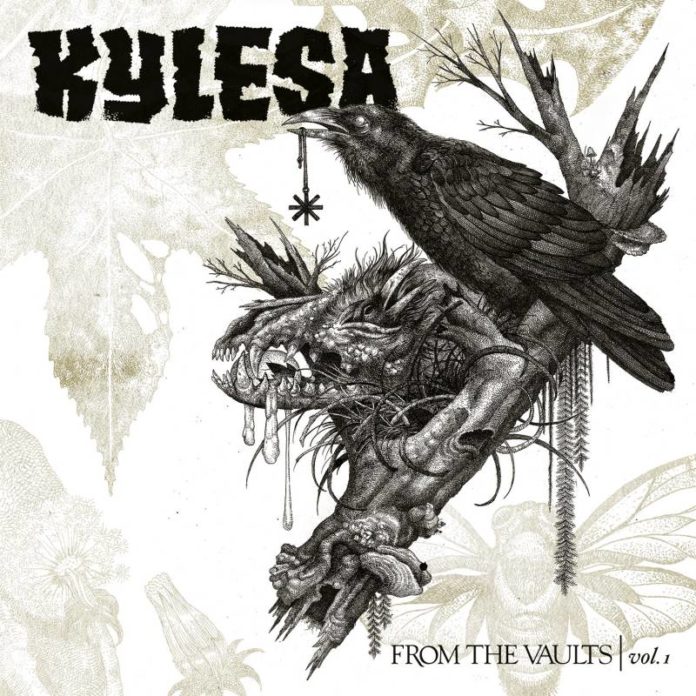 Mastodon may be the perennial heroes to emerge from the Georgia sludge/metal scene, but for my money Kylesa are the ones to beat these days (especially after Mastodon entered their “New Coke phase”, to quote one of my co-writers). Their command over the forces of driving percussion (two drummers, folks!), truly dank, sludgy riffage and the awe-inspiring vocal prowess of guitarist Laura Pleasants made me an instant fan ever since I saw them live in 2009. While I have a great deal of appreciation for the band, I’m faced with reviewing their new B-sides and rarities compilation, From The Vaults Vol. 1, which ordinarily I’d be reticent about, but this isn’t your average comp cash-in. Seasons of Mist managed to tackle the challenge of making one of these actually worth your time and money, and any fan of Kylesa or sludge in general will find a lot to like here.

The thing that makes From The Vaults stand out is that it’s structured and ordered like a traditional studio album, rather than just being a list of miscellaneous tracks. An intro leads you into “Inverse”, which wastes now time hammering you with mighty riffage in under three minutes. “111 Degree Heat Index” buzzes like a hornet’s nest while the bass slides and twists like a snake; it certainly evokes the oppressive heat of its namesake (and the band’s home). Though ranging from various points in the band’s career, the songs flow and have cohesion, though the avenues the band explores have their own twists and turns. “Between Silence and Sound II” draws comparisons to Isis, with its glowing synth over measured drumming and expertly deployed waves of feedback…before Pleasants lets you have it with both barrels. Only one track later does “Paranoid Tempo” evoke the Melvins and hardcore of old, with its punky riffs and gang vocal chorus. Kylesa wear these various masks expertly, always sounding like themselves no matter which influence they’re wearing on their sleeve.

My favorite track on the comp is “End Truth”, with its harmonized guitars, trade-off vocals and doomy introduction, but the two covers that close out the record almost manage to top it. A rendition of Buzzov-en’s “Drained” manages to sound as fuzzed out, evil and subterranean as its source material, which is no easy task. Conversely, I’ve never heard a cover of Pink Floyd’s “Set the Controls for the Heart of the Sun” that I felt captured the feeling of the original (though I’ve seen several metal bands take a crack at it), but Kylesa’s version comes pretty close. The signature bassline takes center stage as its transmorphed by the Georgia crew into another of their signature giant riffs, backed by a drunken bassline and a wah-wah guitar solo. Kylesa have repurposed the classic prog jam into something for their own uses, which is as good of a reason to record a cover as they come.

Every track on From The Vaults Vol. 1 is worth your listening attention, which is a rare feat. I balked at the title at first, with its promise of more to come, but now I’m excited to see what else Kylesa has waiting in the wings.