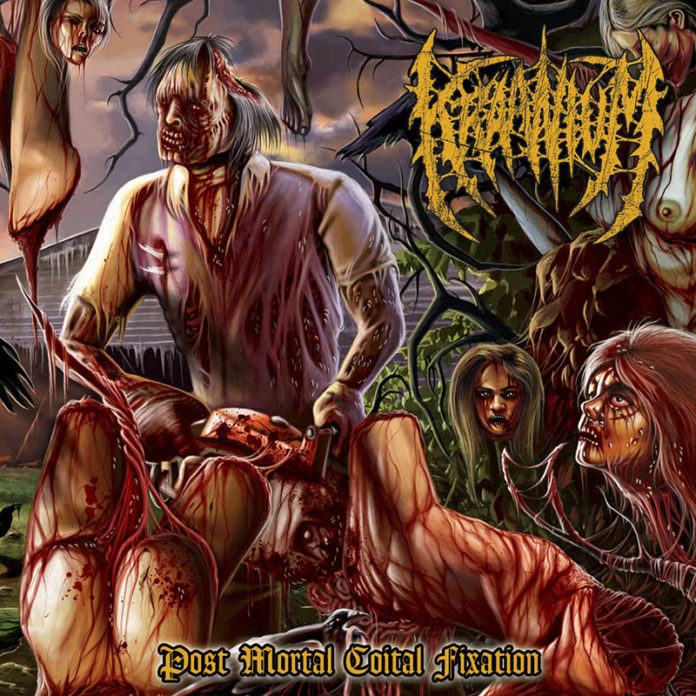 I know on multiple occasions I have brought up the fact that slamming brutal death metal can be quite difficult to do well.  There are so many factors that can take a well-meaning slam album and turn it into a lifeless and repetitive mess.  It is because of that I wanted to take a break from slam for a while since it was all beginning to run together for me.  However, that “break” from slam ended almost immediately when I was given “Post Mortal Coital Fixation” by Kraanium.  I didn’t even know they had a new album coming out until about a month ago, and that lack of knowledge surprised me since I was a fan of their previous releases “Ten Acts of Sickening Perversity” and “The Art of Female Sodomy“.  It’s needless for me to say that I was quite excited to hear what these Norwegian sociopaths were able to come up with this time around.

Recently I mentioned how important it is to me for a death metal album to open up with a song that will undoubtedly make sure I know that the band isn’t here to mess around, and Kraanium does exactly that.  ‘Post Mortal Fixation’ is a short-and-sweet piece that focuses on a real nasty riff that you can’t help but move your body to, which leads into four crushing minutes of ‘Stillborn Neurotic Fuck Feast’.  I used to drive 80,000 pound semi-trucks and still operate construction equipment that can exceed well over 60 tons for a living, and this is far heavier than anything I have ever hauled, dug, or scraped off of this earth.

It is because of this primal need for Kraanium to sound so plodding and barbaric that it gives the entirety of “Post Mortal Coital Fixation” a ton of charm.  While each song may rely on the slam factor, the band does a magnificent job of somehow not making it sound tired and worn.  The Funderud brothers, Martin (vocals) and Mats (guitars), seem to know exactly what is needed for this type of brutal death metal to be incredibly entertaining.  Each riff is specifically crafted to invoke that feeling of being crushed to death while Martin’s guttural vocals are akin to a septic tank bursting, which in this case is a very, very good thing.  Mitch Rider’s (Blasphtized) drums do far more than just keep a beat; it drives the music much further than it would be able to on its own.  Tracks such as the aforementioned ‘Stillborn Neurotic Fuck Feast’, ‘Bursting Rectal Sores’, ‘Slurping the Vaginal Pus’, ‘Crack Whore Pounding’, and ‘Sculptures of Perverse Suffering’ are some of the best slam I have heard this year.

The only song that I wasn’t crazy about was their cover of ‘Entrails Full of Vermin’ by Abominable Putridity.  The original version is so powerful that it is very hard for any band to try and recreate its magic, and unfortunately I think Kraanium may have fell a bit flat on this one.  Plus, this was the last song on “Post Mortal Coital Fixation“, so it is pretty disappointing for them to end such a fantastic album on a low note.  This next one is just me being picky, but I know that brutal death metal bands love to go overboard with band, song, and album names.  Hell, that’s one of the major appeals to me about the sub-genre.  However, the name “Post Mortal Coital Fixation” is just an overblown way of saying “I <3 Necrophilia”.  I am all for hamming it up with titles like that, but I think they could have done something better.

In addition to the music being top-notch, it looks like Kraanium also enlisted the help of Lou Martinez (Flesh Throne) and Jason Lambert (Pain Penitentiary) to do guest vocals on ‘Sculptures of Perverse Suffering’ and ‘Slurping the Vaginal Pus’.  Both of these men do an excellent job in keeping with the guttural sickness that Kraanium is known for and really bring those tracks to the next level, and they sound great on their respective tracks.  In fact, everything on this album sounds incredible, with the exception of the bass.  You can hear it a tiny bit, but I wish it were a little more prevalent overall.  I know I already spoke of him, but I think Mitch deserves another mention because this is also his first album with the band and is one of the major highlights of “Post Mortal Coital Fixation“.

While slam tends to get justifiably harsh criticism, Kraanium were able to forego just about every single pitfall that plagues the sub-genre.  The relentless groove, stellar composition, and overall brutality of “Post Mortal Coital Fixation” is extremely enjoyable and has tons of replay value.  I have been headbanging to this album about two times per day for the past three weeks and it has not worn thin on me by one iota.  These five men have crafted my favorite slam album this year by far, and if you are a fan of this type of music like I am, then you will not be disappointed by giving your money to them when they are on tour in the United States (who else is going to that Dayton, OH show with me?).