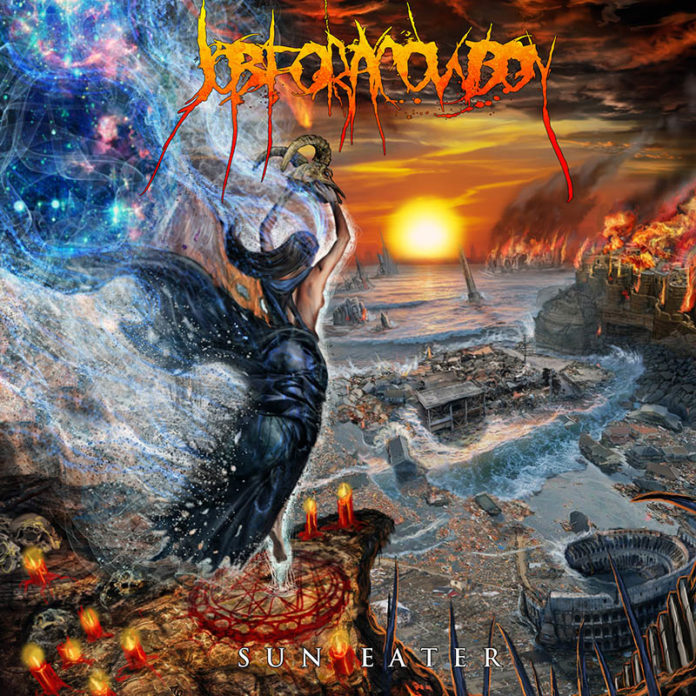 Up until now, Job for a Cowboy have been band that I have avoided like the plague. Deathcore to me has always seemed anti-musical and extreme for the sake of extreme. Something so far from the core precepts of what I always thought to be, if you’ll pardon the expression, true metal. Metal has always, no matter how extreme it got, been song-oriented, and I always felt that JfaC and their ilk flew in the face of what death metals originators tried to accomplished. But, I had heard inklings recently that the band had turned over a new musical leaf and that their newest album, Sun Eater, would be a major departure. Thankfully, all the rumors were true.

Sun Eater is like a painting. All kinds of colours and emotions and patterns blending together in such a way as to make something cohesive. There are traces of extreme metal of nearly every variety. From thrash breaks that segue into passages of blackened violence, Schuldiner-esque grandiosity meeting JfaC‘s pre-established speeds. The obvious star of the record is the guitar work, and while I’ve already expressed my disdain for the band’s all-violence-no-structure earlier work, current axemen Alan Glassman and Tony Sannicandro seem equally disdainful, refusing to stay in a single gear very long.

Jonny Davy‘s vocal palette has widened drastically from the last time I bothered with the band. Much like his guitarists, he seems eager to change moods and more than capable of adapting his voice to each passage’s needs. The most impressive part of all of this is the fact that the record is so heavy the whole way through. Whereas many death metal bands that move into more progressive realms do so by incorporating other sounds, instruments and musical forms (see: acoustic guitars, pianos, and electronics), JfaC do so without compromising on their extremity or metallic intent.

That’s also the double-edged sword of the whole thing. With such a breadth of work and emotion in a record that is still such an extreme statement, it leaves the listener wanting just a little bit more. Like just a kernel of something different would give a that little shot of flavour to make the whole thing really explode and come to life. As it stands, though the album is a fantastic and surprising piece of work, there are few moments that the listener can really hold on to. It’s like a great movie that lacks a touchstone moment: The Empire Strikes Back without “I am your father!”.

Despite its imperfection, Sun Eater has succeeded in making me a fan of Job for a Cowboy. This is truly a brave new world that the band is stepping into, and I for one hope that the world responds to what a brilliant piece of work their new outlook and experimentation has created.

A staggering piece of work and a huge step forward for a much-maligned band.
Showcases a width breadth of styles and emotions
Truly engrossing
Retains its staggering aggression despite its many changes and moods.
Lacks any real touchstones or "a-ha" moments for the listener to latch on to
May disappoint fans of their older material
4.5

Ummmm has no one listened to Ruination? Fucking amazing