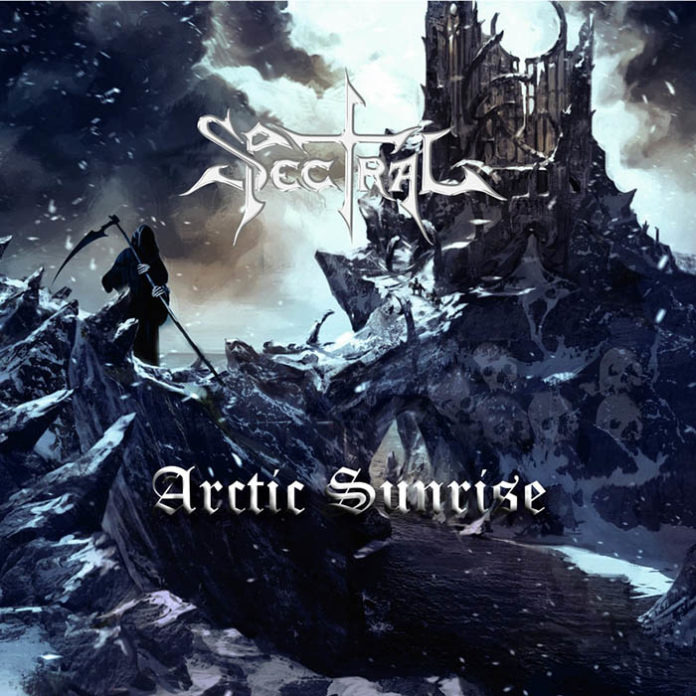 Having observed their twentieth year as a band back in 2015, Spectral‘s latest album gets some suitable shake-up from the guitarist and bassist getting replaced shortly before its recording, with the drummer and that new guitarist departing after its completion. The shuffling of members aside, the line-up for Arctic Sunrise still puts together a very solid blend of black and death metal.

Songs like “Evil Takes Control”, “Nuclear Assault”, and “Vengeance in Blood” do a nice job of melding the spirit of ’80s death with the bleaker, raspier toothiness of ’90s black, jamming out head-banging riffs while shrieking and hammer-bashing, striking a very enjoyable balance between the two energies.  The main point of modern connection is in the production, which keeps things generally clean, but finds room to brush some grit into the percussion channel and guitar filters.  There are also some sparingly-used keyboards, which lend a cool ethereal touch to a few key moments, and while the music clearly draws heavy inspiration from the golden years of its musical components, the band seems fairly open to experimenting with how to bring those elements together.

The weirdest moment would have to be the appearance of the melody from children’s song “Glunk Glunk Went the Little Green Frog” in “In Battle with Fire & Steel”, but aside from that eyebrow-raising inclusion, the album feels like one with very few mis-steps.  Given that half of the band was new for the recording of Arctic Sunrise, fans should feel reassured of continued quality for Spectral‘s future output as long as song-writer Teutonlord sticks around, and new-comers (like myself) have a good reason to check out the rest of the band’s catalog.