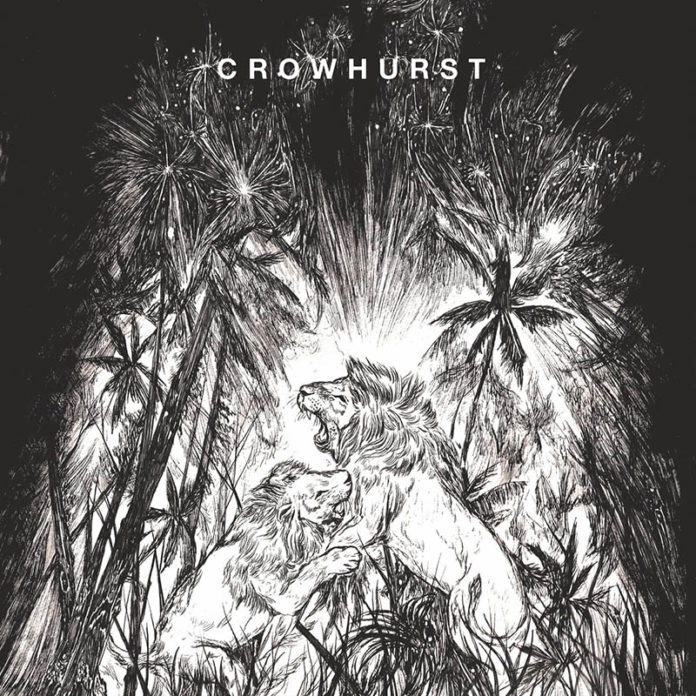 I first heard Crowhurst with their self-titled album from last year, which (going by the press info for this new album) is now being referred to as I to establish retroactive continuity of some sort (which should give them some cache with the comic book crowd).  That prior album drew from a striking range of styles for its material, fusing them together in inventive ways, so I had reasonably high expectations for this follow-up, and from the rolling synth blats which opened first track “Cold Sweat”, I felt reassured that the group would be in good form.

After that quick but noisy intro track, Crowhurst settle into more grounded operations, the blended styles all gleaming through, but welded into a whole that, while not quite uniform, has enough consistency in its mannering to provide a recognizable thread through the songs.  Sharpened guitar tones and obscured vocalizations serve as the more immediate elements in the mix, drawn across a morass of undulating bass, submerged percussion, and semi-subtle electronic integrations.  The techniques and attitudes are given fine execution, with the aggression immediately obvious even while a persistent sense of something more lurks beneath it.

Nods to the industrial metal forefathers of the ’90s also make their way into the mix, though these are more allusionary than explicit (“No Saviors”, for instance, put me in mind of some exceptionally grimy Land of Rape and Honey Ministry, for instance), but Crowhurst certainly have their own character firmly etched into each of the tracks, and never seem wanting for ideas or energy.  Final track “Dried Blood and Old Earth” may be the one which shows this best, as it cleverly works to expand the harsh audio environment of the first track to thirteen-plus minutes, folding in distortion, feedback, drones, layered harmonics, and more while piling on the tension.  It’s a well-crafted finish with the bonus of giving further depth to the album through the encapsulation effect, making this one that fans of ambitious industrialized metal and/or atmospheric noise should make it a point to acquire.