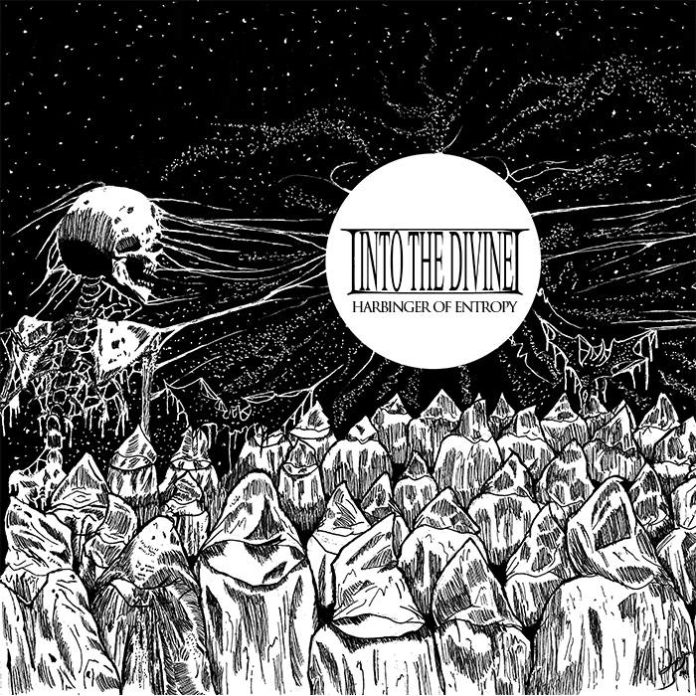 Into The Divine are a troupe of plucky young death metallers who formed half a decade ago in their freshman year of high school. Taking cues from some time-honoured thrash acts like Machine Head and Megadeth, as well as some modern melodeath artists, they display some good-natured ambition in their music, as well as in their touring regime. With the release of their debut EP, Harbinger of Entropy, the band delivers an earnest take on the darkest aspects of melodic death metal.

The Machine Head influence immediately makes itself apparent on the wailing, gothic opening track ‘Phantasmagoria’, whose jagged, funeral-procession guitars draw stark comparison to 2007’s The Blackening. The dual guitar work from Cole Chavez and Michael McGinley do an excellent job at conveying conflict and struggle as much as they portray wistful beauty, constantly veering and shifting between harmonisation and straight-up assaulting each other. These swift transformative shifts in the music are also aided heavily by Jay Burch’s percussion, which only seems to constantly and rapidly rearrange itself to accommodate the sudden, intense emotional flux of tracks like ‘Divine Slave’.

While the band are exceptionally-talented and naturally wish to display this on their debut record, much of the EP’s weakness stems from this. Many of the songs are injected with so many different ideas that they often tend to descend into pure chaos, losing structure and straying into Yes Sir, I Will territory. Thankfully, Wilson Sherels’ diverse vocal range manages to bring some order to the record, and delivers an extraordinary performance, especially on the harrowing ‘Demons I Deceive’.

Despite its shortcomings, the sheer potential on display across Harbinger of Entropy can only make you more excited for their sophomore release. This one’s just a warm-up.

Into The Divine – Harbinger of Entropy
Reader Rating0 Votes
4