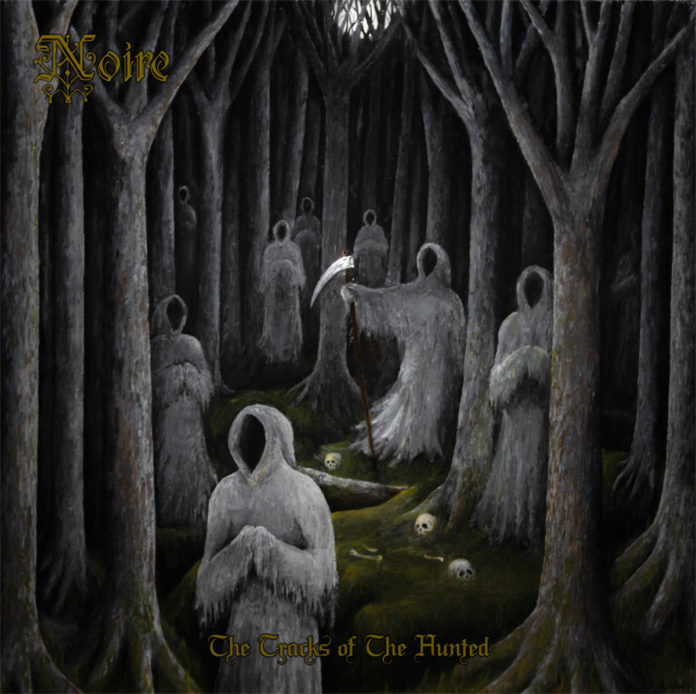 With a smooth piano introduction, followed by a peaceful acoustic guitar, your first impressions of The Tracks of the Hunted  might be deceiving. If, like me, you are not familiar with the band, you might even ask yourself whether this is some sort of ambiental project without any violence. And then… you’ll hear the screams.

As if they wanted to give you a false sense of security, Noire packed this EP with several soft instrumental tunes. Even as background noise, they appear to be nondescript, even though something about them seems to keep you on your toes. “Eternity,” for example, is made up of an acoustic guitar piece that somehow conveys a sense of unease and urgency. If you are not paying attention, you might miss it, but there are painful shrieks in the background, as well as some ominous chants, while a bell tolls somewhere in the distance. The balance of the audio is moved from left to right, creating a vertiginous sensation, even if you are not fully aware of what is happening or why.

The EP carries a single traditional metal song, although with a running time of almost 9 minutes. It’s the kind of death metal that Opeth were doing before Mikael Akerfeldt decided to go full King Crimson on the world, although with some elements that remind me a lot of melodic black metal bands like Watain and Dissection. It’s a powerful track, and it actually benefits a lot from its surroundings. Being packaged with soft pieces, “The Tracks of the Hunted,” the band’s sole foray into heavy metal, is able to grab you by the throat and not let go.

Noire – The Tracks of the Hunted
Reader Rating0 Votes
4.5