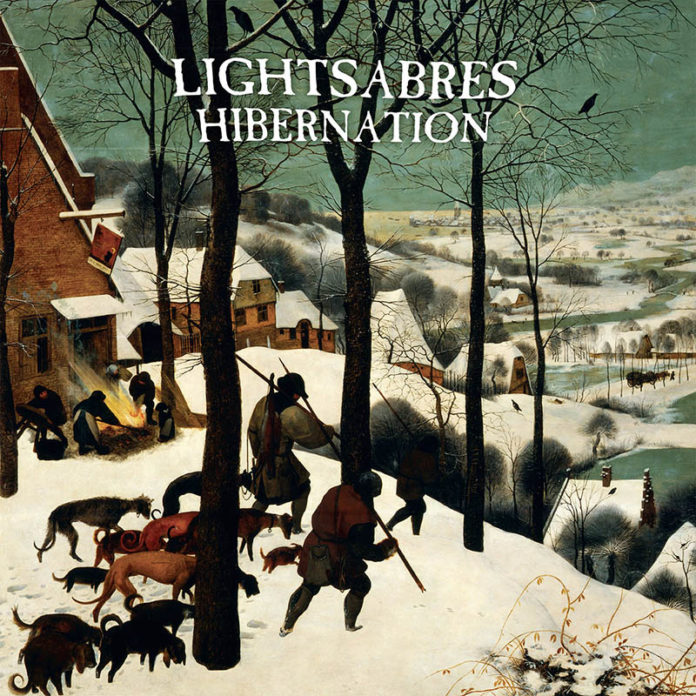 Hibernation is this year’s entry into the string of annual albums from the Swedish one-man band of Lightsabres. If you haven’t heard one of the earlier entries, just imagine stoner rock merged with easy-going punk, and you’re on the right track. What Hibernation brings to play is eleven more tracks of that fusion (or twelve of ’em, if you go with the cassette reissue it’s getting from Medusa Crush Recordings) with a vague wintry theme, and some refinement of the style.  Fuzz on the guitar and vocals remains a dominant force (possibly as a means of masking the kinda lo-fi nature of the recordings), and the drumming still avoids anything too adventurous, but feels as though the songs are benefiting from better planning and tighter arrangements.

Sure, some looseness and roughness is to be desired when dealing with punky stoner rock, and those qualities are still there, just polished up a bit.  Lightsabres also gets to show off a capability for turning out calmer tunes with more of a poignant leaning, as in the restrained chords of “Cascades of Blood” and “Whisper Softly”, touching notes similar to the aching crooners which crop up every now and then in Uncle Acid‘s catalog, though with less distortion on the singing.  It’s in these slower parts that I think the album’s best moments lurk, though I can’t say how much of that is just relief that the musician behind it has chosen to show tricks up his sleeves beyond the high-speed fuzz-wall antics of earlier releases.

At approximately forty minutes of music, it feels like a fuller album, too; earlier stuff ran through from start to finish too quickly to really build up a presence, but the pacing of Hibernation lets it not only craft one successfully, but to show different sides once that’s done.  All in all, I’m quite impressed with the developments shown here, though it is kind of amusing that the lively musical style which has largely defined the band so far will seem like a minor presence to listeners coming in on this one.  Even so, I’d give it a firm recommendation to anyone looking for a capable fusion of punk/doom/stoner/psych/whatever else.