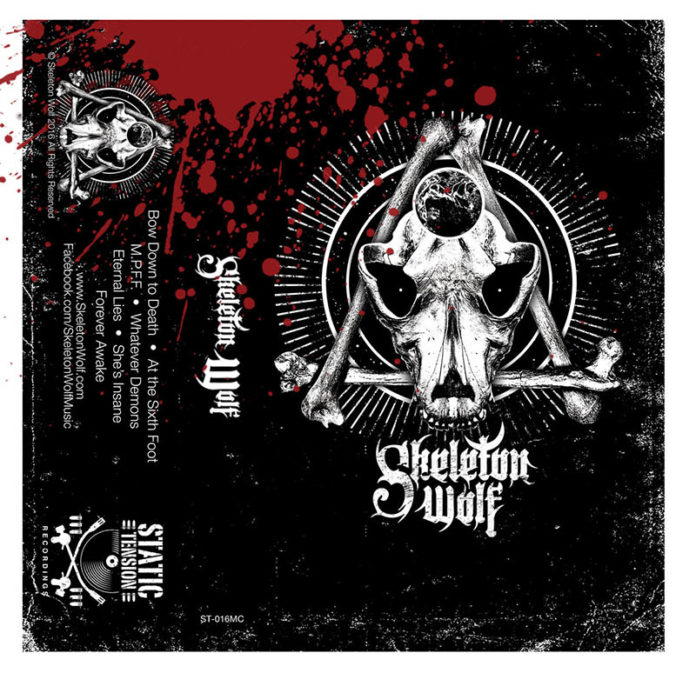 This album from self-described “extreme metal” trio Skeleton Wolf aims to fulfill that descriptor by effectively combining death metal and power metal, though the balance is usually pretty heavily in favor of the death (there’s also a few dabs of blackened atmosphere, which works surprisingly well). The biggest points in the music’s favor come from strong rhythms and chemistry between the instruments, and while the vocals are unlikely to be something you haven’t heard before, they’re belted out with enough force and feeling to make a decent go of it.

The songs seem very well-polished and plotted, deploying their breakdowns and crescendos with sharp timing, and getting away with as much extension of their lead riffs as can be decently included.  Though the lyrics are kind of eyeroll-inducing (for reference, the title of “M.P.F.F.” stands for “Metal!  Punk!  Fight!  Fuck!”, as you’ll hear several times while listening to it), that unabashed enthusiasm does a nice job of hearkening back to the ’80s, and considering how much glory death and power metal had in those days, it comes off as more of an homage than a lack of creativity. This is especially so considering the heavy arrangements Skeleton Wolf show themselves capable of devising, as with the multiple rises of “Whatever Demons (We All Have Them)”.

Really, the power of this album resides in the beats and riffs, so as long as you can turn off lyrical critique and let yourself flow along with those, you’re likely to have a pretty good time.  This is Skeleton Wolf‘s first album, and on that metric, they do a damn fine job. Plenty of energetic hard-beat grooves packed into the tracks do their best to get listeners’ heads bouncing along in time, the band shows a clear concern with avoiding sloppiness or half-assed work, and they get to try out a few variations while keeping their central style clear and identifiable.  Check it out if you’re in the mood for death metal with some pep to it.