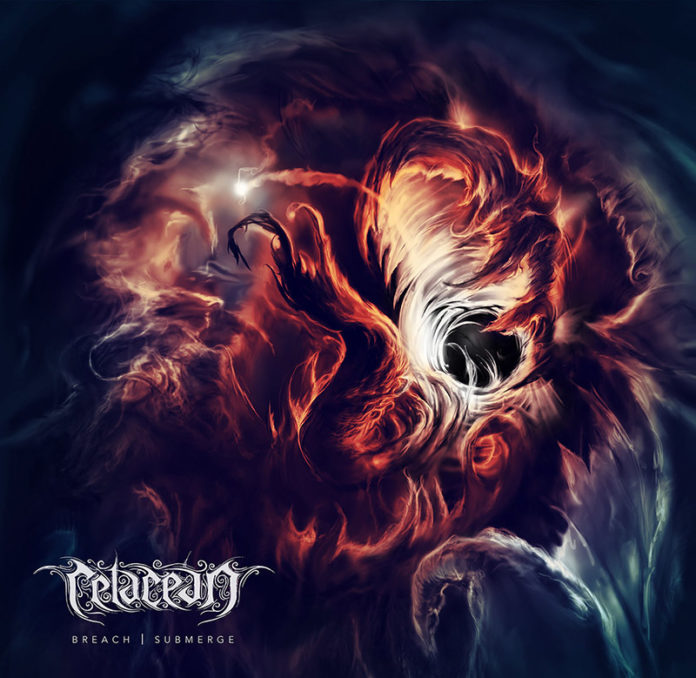 With the more than thirty minutes of this album’s material split into three tracks, Cetacean come off as a band that wants to make a big impression with their debut.  Sporting titles like “Earth Is A Whisper”, “Relationships Deteriorate”, and “Outpour I. II. III”, things are introduced in a way that’s grandiose without going overboard (though if they’d added subheadings to those divisions of “Outpour”, that would probably have tipped the balance).

The first of these songs indulges in a few minutes of near-jazzy instrumental toodling before abruptly bursting out into howls and violent guitar chords.  From there the standard black metal affair gets blended with the preamble’s style for some proggy (though fast and screaming) arrangements, morphing through rhythms and musical approaches in rapid succession, nimbly flipping into and out of melodic bridges, and switching from howls to clean vocals with impressive smoothness.  Granted, none of these things are too rare in the realm of modern black metal, but Cetacean do an excellent job of stitching it all together in effective and moving ways.

Given the length and variety of each track, going into more details on any of them would basically be a reprise of the last paragraph; however, in common with their churning sets of attributes, the songs are also linked by the band going in different directions with each of them.  “Relationships Deteriorate”, for example, makes more use of choppy breakdown rhythms throughout its run, while “Outpour” swirls in some death metal for the riffs and vocal stylings early on, and atmospheric calmness towards the mid-section before returning to heavy blackened territory.

All in all, it’s a debut album of which the band could easily be proud years from now, and something that should draw the ears of those looking for something that could be slotted in alongside Gnaw Their Tongues, White Darkness, Trinacria, or other bands which use black metal as more of a base than a final goal.  Plenty of meat on the bones for repeat listening, and while it does seem to finish without rising to a new level, that should be remedied by their next release, which will hopefully released soon enough to hold onto the momentum from this beginning.