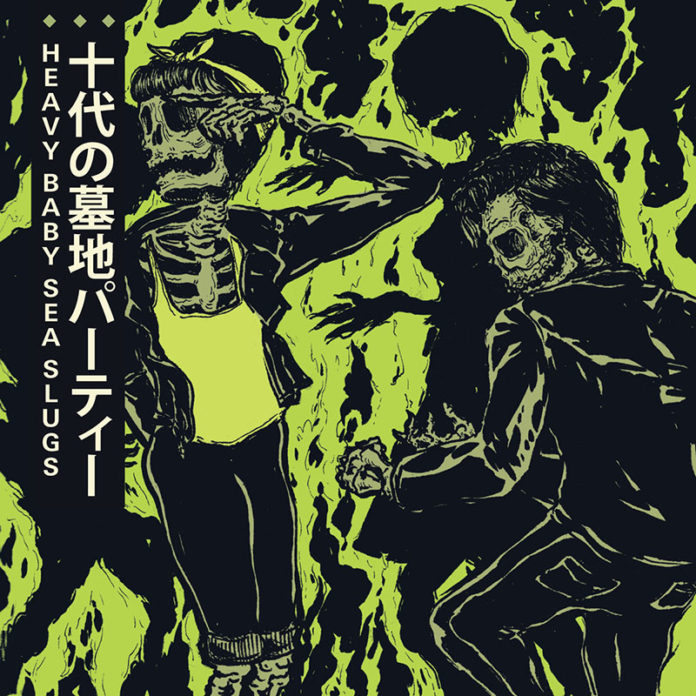 With the four tracks of this EP, the Heavy Baby Sea Slugs use punky blasts of sludge and noise to fill just over a quarter of an hour, keeping things tight but not too thin.  Opening with the evocatively-titled “King Midas of Shit”, they let anticipation build for a few seconds of feedback hum before launching into gurgling vocals, fat-amped strings getting throttled, and percussion which kicks like the drummer’s imagining some personal grudges at the end of their sticks.

The title track, which follows on the heels of that opening salvo, moves into a weird psych blues mode, something like psychobilly played at half speed, while the band manages to give their instruments audible sneers and occasional bursts of furious, J-punkish rattles and yells.  “Pit Bait” offers another new turn, this time into (fittingly enough) a drum and bass run ideal for getting a mosh circle going, though the moves the song takes after that make it hard to tell whether the band wants participants to get their knuckles bloody or burst a lung first. Lastly, “Zero One” grinds things towards an end with more bass distortion, fitful drumming, and guitar presence that feels like broken air-raid sirens heard from a distance.

It’s an interesting set of tunes, and while it’s almost certain to make for rough first listens, there’s enough character and distinctiveness to each track to help bring listeners back for more once the initial repulsion wears off.  With the band set for a tour in Japan and Taiwan this month, comparisons to the weirder side of Japanese punk may be an easy jump to make, but that doesn’t make it any less fitting. Check this crew out for a band comparable to the Nagasaki Nightrider crowd, but with a channeling of that style into slower, heavier, and creepier output.