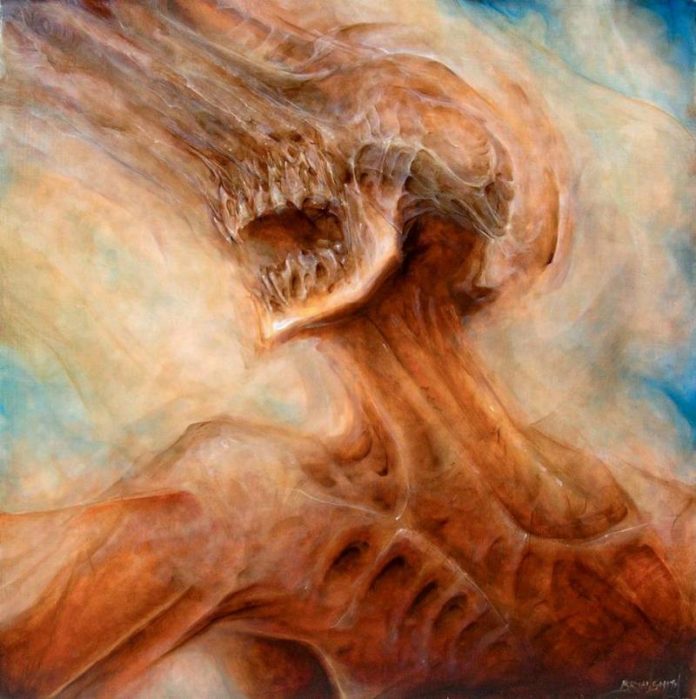 It has become pretty popular amongst new bands in the metal underground to look to the past for inspiration, particularly focusing on the 1970’s, with bands like Black Sabbath and Led Zeppelin being the favorites. On the more extreme side of things, there’s been a bit of a revival as well, with many bands paying homage to the death metal scene of the 80’s and early 90’s, this tiem focusing on bands like Miasmal and War Master.

Horrendous are an up-and-coming band from North Carolina that play a brand of death metal that is heavily indebted to the 90’s. Their first full-length album, The Chills, had a distinctly thrashy feel to it; Ecdysis, the band’s latest release, however, is a much more melodic effort, heavily influenced by the sound that Entombed and Dismember orchestrated in Sweden. The Boss HM-2 pedal is the biggest tell-tale sign of that influence, as it seems nearly every death metal band in Sweden back in the 90’s had that tone all over their albums. Horrendous manage to make it not sound like a garbled mess though, which is no small feat since the guitar is mostly played at lightning speed; “Resonator” is a blazingly fast, heavy tune, with loads of tremolo picking and some fairly evil sounding progressions, similar to Grave. The lead guitar work on this album is impressive and, in my opinion, the best thing about the album. It’s hard to pin-point a particular solo, simply because nearly every song has some truly jaw-dropping leads, though “Titan” does have some truly beautiful moments, including some clean singing, and the last 2 minutes are absolutely gorgeous. The overall attack is pretty ferocious throughout the album, and there are plenty of songs that will have you banging your head, such as the one-two punch of “Weeping Relic” and “Heaven’s Deceit”. Horrendous’ sense of dynamics is pretty well-developed; the fast tunes rock just as hard as when the band slows things down, and when things get a little quieter, like on the instrumental “The Vermillion,” it doesn’t feel at all out of place. Another great track is the also instrumental “When The Walls Fell,” which has an almost Iron Maiden-esque feel to it, with its sense of bombast and glorious melodic lead guitar-work.

The production does a good job of capturing that old-school vibe, with just enough reverb to give Ecdysis an air of authenticity. The biggest concern I have is that sounds a little too much like Horrendous’ influences. Opening track “The Stranger” is an excellent example of what I’m talking about; it starts with a deep Moog synthesizer, which gives way to a crunchy-yet-melodic riff and beautiful soaring guitar solo, only to then go into a classic death and roll riff that sounds like a cast-off of some mid-era Entombed record. The heavy moments sound like Grave and Dismember, and then you get some great solos and melodic moments that sound like early Dark Tranquility. I find myself wishing Horrendous would just put a little bit more of their own spin on the classic death metal sound. There are certainly a lot of high points, and some truly impressive musicianship, but the band just doesn’t seem to do much to differentiate itself from its influences.

While I feel Horrendous could do with a little more originality in their songwriting, I readily admit that they are top-notch in their musicianship. If you like a lot of melody in your death metal, there is a lot for you to sink your teeth into on Ecdysis. Also, for better or for worse, if you’re in the mood to relive all the best moments of Entombed, Dismember, and early Dark Tranquility, this album is a great option.

Impressive musicianship and production, slightly dragged down by lack of originality in song-writing.
Killer solos
Some truly beautiful melodic moments
Great sense of dynamics
Sounds a little TOO much like the old-school Swedish death metal bands
3.5