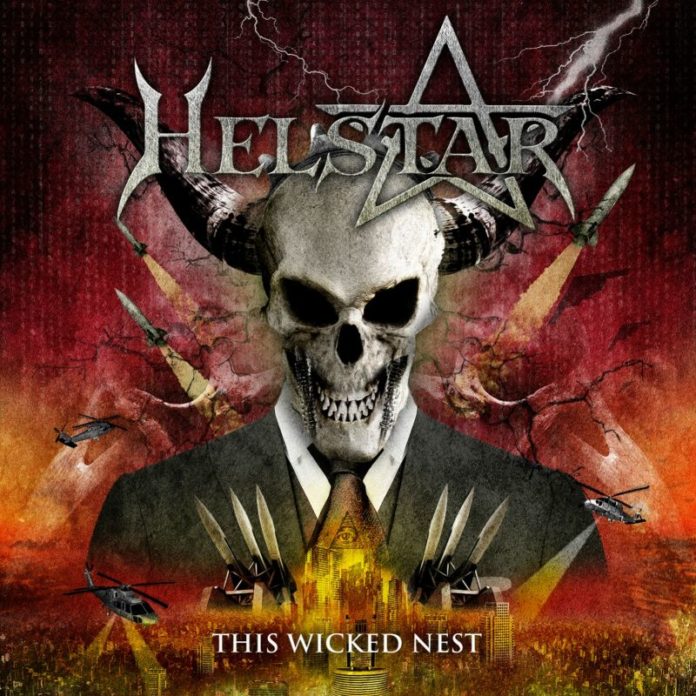 Helstar were a bit of an unsung treasure back in their heyday. Even though lots of people know James Rivera from his stints in Seven Witches and Vicious Rumours, his primary band, which has brought us quality albums like Nosferatu and Remnants of War, has remained firmly entrenched in the underground.

That doesn’t mean that they aren’t still cranking out a fine musical product. Their latest album, This Wicked Nest, shows a band full of the kind of passion and drive that you’d expect from musicians half their age. It’s an uncompromising record that stays true to the band’s power/thrash roots, and which it follows none of the current trends, neither musically nor in regards to production.James Rivera is in fine form, sounding only slightly different from his performance on the band’s classic albums.  While he has always sounded like a lot of other guys, he’s always managed to seamlessly transition from one vocal style to another, exactly when a song demands. A good example of this ability is “Defy the Swarm”, where he sings cleanly in passages that feel ripped from and early Agent Steel song, and then transitions on the chorus with a blood-curdling black metal screech (a new trick for this seasoned vocalist).

The rest of the band, composed primarily of guys who were members throughout the latter half of the 80s, aren’t shy about strutting their musical muscle either. While power/thrash remain at the center, traces of doom and speed metal crop up throughout the record. The most notable stylistic shift on the album comes in the doom strains of “Cursed”, which sounds like Ancient Dreams-era Candlemass with an extra crunchy rhythm tone.

The most important aspect of This Wicked Nest is the fact that the band didn’t try to mess with what their brand represents. Although many bands of similar vintage and situation have reunited in the past decade, when they have tried to create new music they’ve done so trying to ape current trends in metal; as a result, a lot of those new albums ended up sounding hollow or uninspired (looking at you Lääz Rockit). With Helstar you can tell that they remember and embrace the school they come from.

Helstar are a band of the 80s and have made an album that sounds like it comes from that time. It’s their passion for their music that keeps This Wicked Nest sounding fresh and interesting. There are great songs that are well worth your time and money, so if you’re looking for something new in an 80s underground kind of style, pick this up instead of the latest Testament record. You’ll be glad you did.