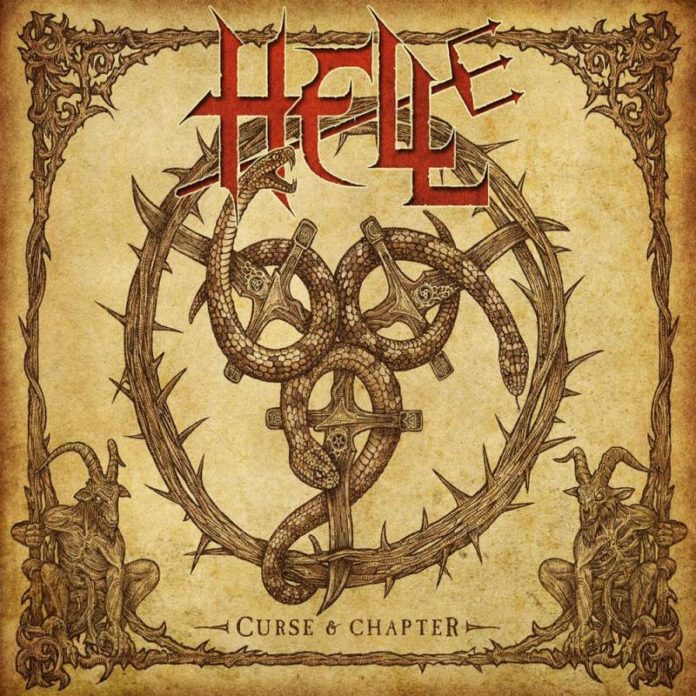 Hell’s story is a unique one in the pantheon of modern traditional metal. For those that don’t know the band, they were one of the many operating in the British underground in the heady days of the early 80s. They released a handful of demos and a lone, sleeveless single before vanishing into obscurity.

That is until 2011, when Andy Sneap (ex-Sabbat, producer with Accept, Megadeth, Testament and others), who had been playing guitar with the reformed band for a few years, sat at the helm of their first full-length album. Human Remains was well received by critics and sold well. Really, it was just setting the stage for bigger things.

Curse & Chapter finds the band taking things to the next level in terms of song writing. While Human Remains could have easily been viewed as a British counterpart to Accept’s Blood of the Nations (complete with obvious Sneap production parallel), this new album impresses me as a dark and aggressive update on the early Michael Schenker Group albums, wielding the same kind of hookiness and drive that those albums offered. The third song (excluding the intro cut) “Darkhangel” is an excellent example of this, its chorus infecting the listener with a nearly AOR level of melodic cache. We also get obvious power metal nods in songs like “End Ov Days”, with its percussive, marching construction during the verse, choral and symphonic additions, and blazing lead-axe work. Lead singer Dave Bower is also no slouch, sorry like an eagle over everything the band dishes out. The man sounds like the evil twin of Bruce Dickinson as educated by King Diamond. He’s actually that compelling as a singer.

The whole band is perfectly in sync with one another, operating on the same wave-length, crafting devilish and hellish landscapes in the listener’s head. Large credit for this goes to Mr. Sneap whose love-it-or-hate-it production style works wonders here. The man has smoothed out some of his rougher edges at the desk, making a record that sounds very live.

Not a perfect record, I did find the keyboards to be occasionally distracting. It only happened once or twice but, damn it, it’s my job to notice these things! Speaking of nit-picky crap to point out, I found that the album went on just a touch too long. Simply, the album would have had a little more punch if it were maybe a track or two shorter. At this length, it’s a little exhaustive, and may limit the listener’s desire for immediate and continual replays. Again though, I’m just being a nit-pick because that’s what I have to be sometimes in this job.

Buy it. Buy it at a store, online, from a friend, at a show, but just get your hands on it. It’s a fantastic album that is also a clear improvement on their last record. I see potential for album three to become something of a master platter. Stay tuned!

Whitesnake – Made In Britain/The World Record