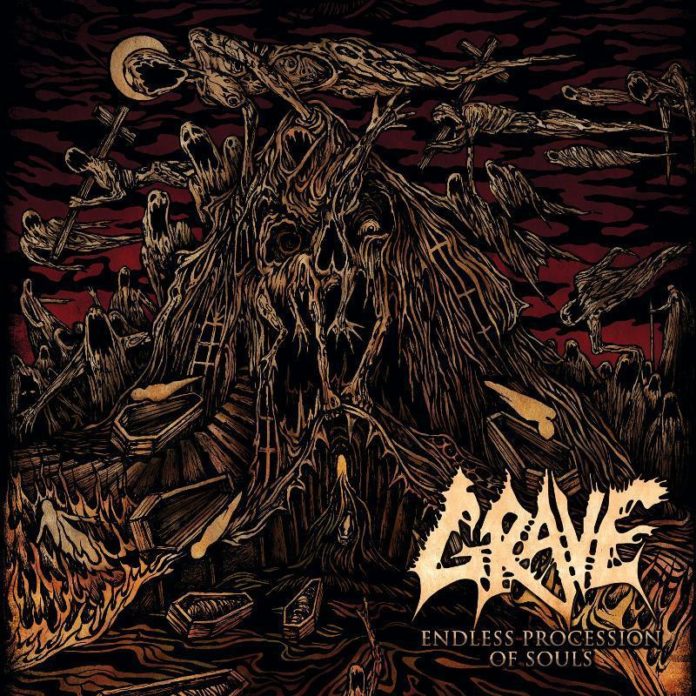 One of the long-running forefathers of Swedish death metal are back after two years with their latest offering, “Endless Procession Of Souls“.  If you know anything about Grave at all, then it is expected for them to come swinging right out of the gate, and as a sign of respect for them I will sideline the other blathering nonsense I would normally mash into this introductory paragraph.

The minimal and haunting notes of ‘Dystopia’ ring out in a fashion that not only gets you nodding in your seat, but you can feel your own psyche prepare for the Swedish death metal onslaught that was about to come with ‘Amongst Marble And The Dead’.  What emanates from my Sennheiser HD280’s is what all us old school death metal fans crave: an aggressive tried-and-true style that has worked for eons.  This formula is one that will be repeated throughout the ten tracks, but this is exactly what we would want from Grave, and nothing less.  Armed with infectious groove and melody, the group seems to have found the perfect balance between old-and-new schools of Swedish death metal.

“Endless Procession Of Souls” has a lot to offer you in the ways of fleshripping death metal, such as the aforementioned ‘Amongst Marble And The Dead’, but that groove I mentioned earlier is enough to really turn your world upside down.  Take ‘Flesh Epistle’, for example.  The riffing in the chorus is so catchy that you can’t help but bang your head.  Even the groovy mid-paced beginning of ‘Wind of Chains’ is misleading when it erupts into utter misanthropic chaos.  The only song that I might have to give a bad mark to is ‘Encountering the Divine’, since there just wasn’t anything going on in it to really capture my attention.  However, a nine out of ten really isn’t too shabby if you ask me.

While the music is ridiculously on-point and forward-thinking on its own, I have to give major credit to guitarist/vocalist Ola Lindgren.  For years he has been engineering, mixing, and mastering his ass off for the past five Grave albums, and he really hit the mark with “Endless Procession Of Souls“.  Grave has always had a crisp and vicious tone to their music, but there is just something that Ola was able to do in order to bring out the barbarity that every member of the band is capable of bringing forth.  Here’s a list of what makes it so awesome:

I haven’t been this enthralled with a Grave album in years, but these knuckleheads somehow were able to create one of the slickest old-school death metal records I have heard in a very, very long time.  After seeing so many older death metal acts kick the bucket, it is always heartwarming to see veterans like Grave still be able to show everybody that this style of metal is far from being dead.  “Endless Procession Of Souls” is just another notch in the illustrious and envious belt of Grave‘s career, and is not a record that should be missed by even the most picky of death metal obsessed fans.