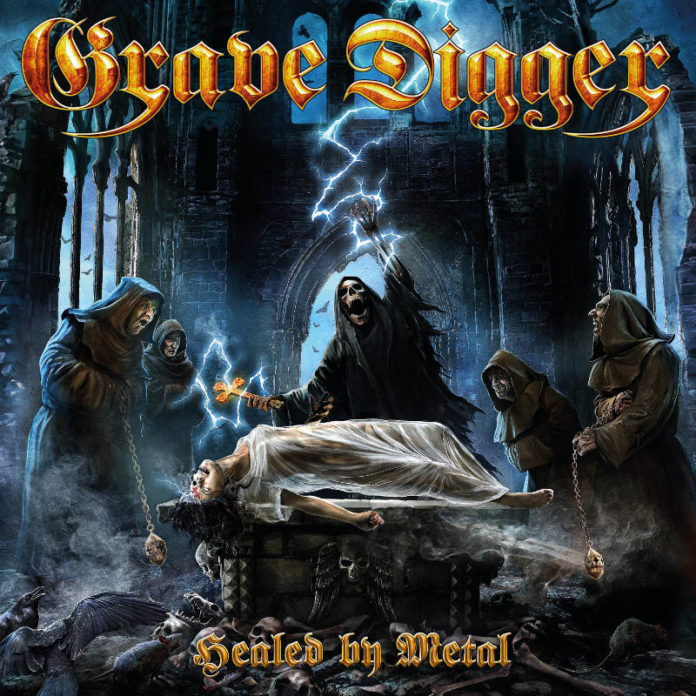 Following up on last year’s compilation of rerecorded songs (Exhumation (The Early Years)), Grave Digger are back with a proper full album to continue their multi-decade run. Opening with the title track by shouting out its name, the band gets right into it, crunching steadily along in their traditional heavy metal (with a streak of death), showing no signs of embarrassment or compromise in carrying on with that style in the year 2016.

And really, since the band has been around for over thirty years, it’s hard to fault them for that perseverance. They’ve clearly got their fans’ needs met, the band’s members seem to be having a good time, and the performances are still sharp, so Grave Digger genuinely put to shame the modern heavy metal bands that try to get by almost exclusively on sarcastic posturing and mock enthusiasm. Listening to Healed by Metal, the energy on display hardly seems forced, and when they launch into noodly guitar shredding, it’s because they want to make the song kick some extra ass at that point, not because it’s what a heavy metal band is expected to do.

Probably the strongest point in the album’s favor is the variety the band uses with the songs. While there are a few instances of straight-forward retro metal, the majority of it tries to combine other styles, like the death metal mentioned earlier, some pub rock yell-along cadences, controlled shots of power metal, folk metal, and even a little unabashed butt-rock. Thankfully, these never seize control as a gimmick gone wild, but instead are put to work under the main metal force, serving as little twists and garnishes on the band’s well-honed sense of song-crafting.

It may not be an album that’ll knock the socks off of listeners, or necessarily coax those who don’t have a taste for ‘heavy metal’ into suddenly hair-swinging and head-banging, but it does offer a fantastic counterpoint to the notion that all modern-day metal which wants to celebrate the very notion of metal has to be done ironically. There’s an earnestness and warmth to the music (even when lyrics about killing things in the dark of the night are being sung) that helps lift it, arriving at, if you’ll pardon the cliché, a whole greater than the sum of its parts. It’s metal for having a good time without taking things too seriously, simply enough, meant for those with the same goals.

In a nutshell
A solid enough album for good times, but nothing too memorable
Reader Rating4 Votes
Positives
Good energy
Neat adjustments to its main style
Negatives
No big aims for the album
The band stays within their comfort zone
4

Hail to the mighty Grave Digger!!