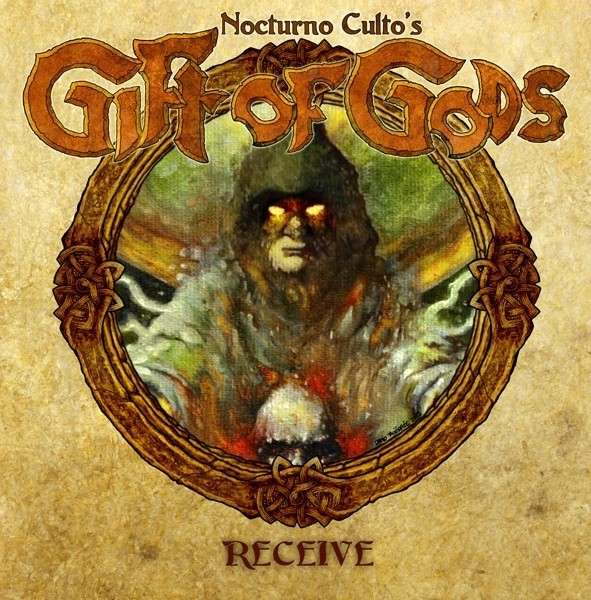 Darkthrone has been consistently brilliant throughout their entire career, which is a claim that few other bands can lay claim to. They’ve conquered death metal, defined black metal, refined crust punk, and are now stampeding across the battlefields of NWOBHM and speed metal. You need only to look at the trail of victims they’ve left behind to understand how monumental their legacy is. So it came as a surprise to me earlier this month when Nocturno Culto announced that he was ready to debut the first release from his new project Gift of Gods, the EP entitled Receive. I understand if a musician feels constrained by the artistic demands of his main project and needs to go on explorations into areas that such a project wouldn’t find appropriate, but Gift of Gods is cemented firmly in the same climes that Darkthrone explored on their most recent LPs, most notably the all-destroying The Underground Resistance. So I went into Receive expecting redundancy, and I exited it with my initial biases confirmed.

This isn’t to say that it’s bad – for Satan’s sake, it’s made by Nocturno Fucking Culto! I just expected more from the likes of him. My chief issue with Receive is that it’s bookended by two tracks in the 7/8-minute range that do a very poor job of justifying their running time. There’s a semi-memorable riff on “Last Solstice” that seems like it was lifted from the first half of Metallica’s “Orion,” but other than that the song has very little to distinguish it. And “Enlightening Strikes” doesn’t even have that; it’s a pretty poor choice for an opener, and it bogs you down fast with an exhausting series of cutting-room-floor riffs that seem to have been forcefully jigsawed together instead of assembled with any sense of compositional aptitude. The instrumental title track pulls its weight more than well enough, and the cover of obscure 80s Swedish metal band Universe’s “Looking for an Answer”  is at least a level above tolerable, but those two don’t really do enough to outweigh the doldrums that bookend the EP. That being said, even the lesser tracks have some pretty killer guitar solos that do a great job of grabbing your interest again, right when you’d thought it lost. They don’t redeem the lesser tracks, but they definitely give you something to look forward to.

I have a habit of being harsh on lesser works of my favorite artists, because I’m of the opinion that they could do better if they put their minds to it; and such is definitely the case for Receive. If I’m going in expecting perfection, I’m inevitably going to be disappointed when confronted with mere excellence. But the real question that I should be asking myself isn’t “would Nocturno Culto do better if he tried?”; but rather, “would anyone care about this album if it weren’t made by a legend of heavy metal?” And based on everything I’ve heard in the album’s 30-minute runtime, it’s honestly hard to say. For Darkthrone obsessives and completionists, this should do a good enough gap of keeping you satisfied in between album releases, especially if you were a fan of The Underground Resistance. But for all those who don’t care for Darkthrone or their most recent releases, you probably won’t find much here to grab your attention.