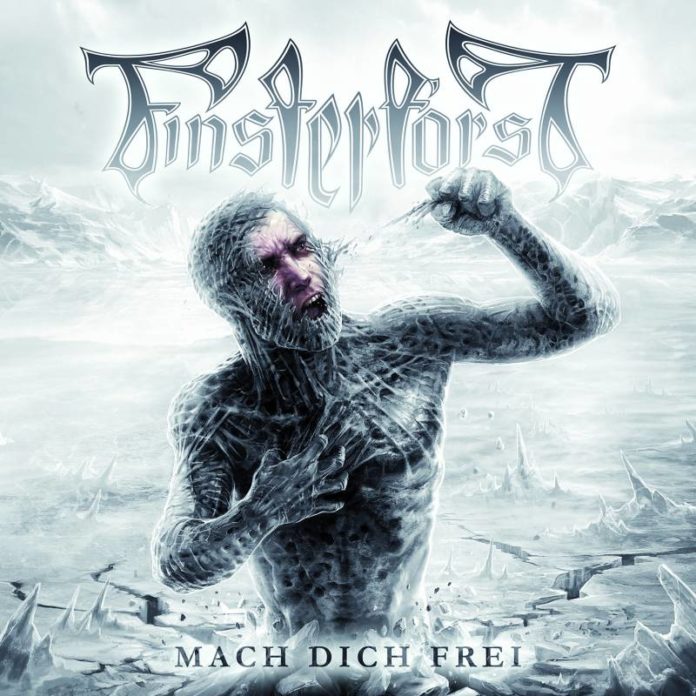 Folk metal has been a pretty divisive genre since its earliest days; while many have embraced the pagan and mythological imagery and instrumentation that comes with it, there are just as many that dismiss it as Ren-Fest schlock. Since bands in the scene often incorporate traditional instruments like accordions, tin-whistles and lutes, as well polka beats and costumes, it’s not too hard to see why the genre hasn’t been taken too seriously by a larger portion of the metal community. I personally enjoy it, for much the same reason that I enjoy power metal, or classic heavy metal; there’s a sense that the music is larger than life, and it often walks the line between beautiful and skull-crushingly heavy.

Germany’s Finsterforst have been creating some of the most epic-sounding folk metal since 2004, and this year’s Mach Dich Frei sees them continuing to hone their craft. There are moments of true brutality mixed in with some absolutely breathtaking orchestral arrangements, clean and harsh vocals are peppered throughout every track, and longtime fans will be happy to hear the accordion is still a centerpiece in several spots. The guitars are in-your-face and gritty, while the orchestral arrangements and keyboards add a melodic counterbalance. The ever-changing dynamics in each song give them an almost operatic feel, and I’m reminded of the more symphonic material by Moonsorrow, as both bands have a penchant for mixing angelic and demonic sounds together with such ease that it’s truly awe-inspiring. “Zeit für Hass” has some gorgeous lead-guitar at the very beginning, coupled with clean vocals in the background that felt almost dream-like, before going into a crunchy, heavy riff that pushes Finsterforst into a more extreme territory.

The production on Mach Dich Frei is pretty impressive, and really puts Finsterforst’s considerable song-writing ability firmly in the spotlight, with transitions from serene to deafening happening so smoothly that you almost don’t notice the music changed directions. On “Zeit für Hass,” for instance, there is a section where the accordion is really pushed to the front of the mix, but doesn’t sound the least bit out of place with the high-pitched shrieking vocals, pounding drums, and vicious guitars. There are a lot of layers to the music that you may not catch on the first listen, but the production is handled so well that the songs manage to avoid sounding too busy, even when there are multiple vocalists trading off lines. The bass and drums are absolutely thunderous, giving the guitars a good heavy bottom end, highlighting the melodies as well as the heaviness. There are a couple of moments where the clean vocals are a little distracting, such as on “Zeit für Hass,” where the higher notes seem to be slightly out of the vocalists’ range, but this doesn’t happen too often, and doesn’t really take much of the momentum away.

If you’re new to the folk metal genre, Mach Dich Frei is a great place to start, and can also make a great addition to the collection of anyone that already knows and loves the genre. Longtime Finsterforst fans will certainly find a lot to like here, with brutal guitar work, gorgeous strings and brass mixed in, occasional “polka beats,” and that absolutely vital accordion that really sets them apart from the rest. I will certainly be keeping this record in heavy rotation for a while, and I daresay that if you give it a chance, so will you

Finsterforst have proven yet again that they are some of the most talented songwriters in folk metal, and already set the bar pretty high for the albums to follow in 2015.
Excellent production
Seamless transitions between heavy and melodic riffs
Impressive array of vocals
Fans of the more "extreme" sounding metal might get turned off by the clean vocals and accordion. Occasionally, the clean vocals aren't quite able to reach the higher notes
4.5