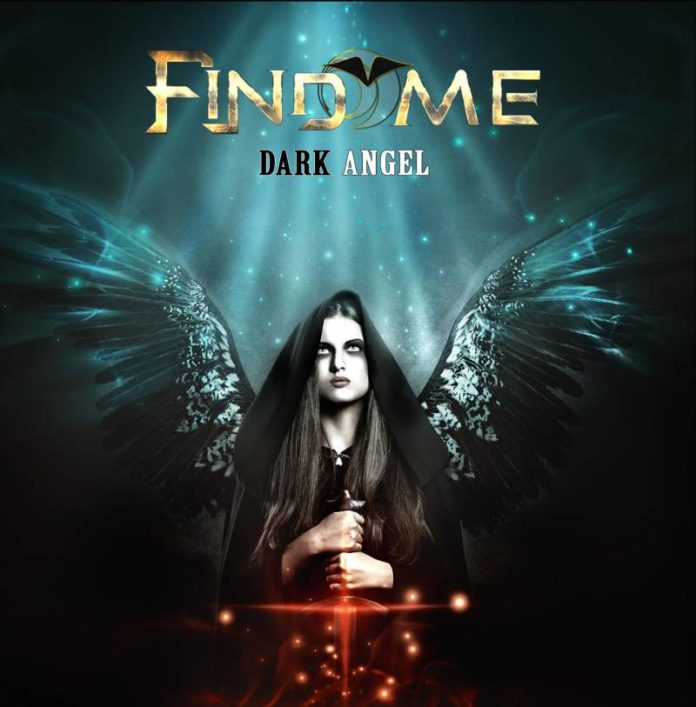 Journey are usually the first band that comes to mind when I hear the term Arena-Oriented-Rock (AOR), and, really, if you look at their career, you get a good idea about how AOR started in the first place. Journey’s early material (pre-Steve Perry) was more of a free-jazz, progressive rock style, but wasn’t commercially successful. Success only came once they streamlined their sound and focused on catchy, melodic tunes that guaranteed a wider audience. Mass appeal doesn’t neccesarily mean mediocre, though, and there are legions of devoted AOR fans, so music snobbery aside, somebody is doing something right.

Find Me is a collaborative effort between Daniel Flores, of bands such as Seventh Wonder and Murder Of My Sweet, and Robbie Lablanc of Blanc Faces. Wings Of Love, the group’s first effort, was met with critical acclaim, and Find Me hope to continue their success with this new release.

Robbie Lablanc’s vocals are a big focus on Dark Angel, and a real drawing point for Find Me, whether they’re soaring high over upbeat numbers like “Let Love Rule,” or crooning on slower tunes like “Forever.” Complementing Robbie’s vocals are synthesizers and super melodic guitars that will draw plenty of comparisons to Journey, particularly Neal Schon’s lead guitar work. The opening track, “Nowhere To Hide,” starts with some modern sounding keyboards and guitar that sound like they’re from an RPG on an old game system like the Sega Genesis. Rather than sounding cheesy, though, it comes off as nostalgic, which is the name of the game here, as Find Me don’t exactly bring anything new to the table, sounding like a mix of Journey, Foreigner, and glam rock-era Def Leppard. Title track, “Dark Angel,” takes a ever-so-slightly darker sound, particularly at the beginning, where the keyboards sound a little gothic-rock tinged, before jumping back into an upbeat, radio-rock chorus.

The production is pristine, which is kind of a pre-requisite in this genre. The guitars crunch along, but never get too heavy sounding, thanks to the heavy use of keyboards/synthesizers, and the vocals are pretty high in the mix. Listen to just about any album by Journey, starting from the Steve Perry-era onward, to get an idea of what to expect as far as production. Although there are a few modern touches, with electronic music influenced keyboards mixed in on the opening track, and “Face To Face,” Dark Angel mostly sticks to business as usual.

Although Dark Angel is a pretty solid AOR record, it doesn’t do much to distinguish itself from the majority of bands in the genre, and comes off as a little overly formulaic at times. This is the album’s biggest shortcoming, even if the musicianship is excellent and Find Me would probably be a great, energetic band to catch live, particularly in a big arena. The album is full of songs that could all be rock-radio hits, but if you’re looking for a slightly more “challenging” listening experience, this might not be for you.

IN A NUTSHELL
Great musicians making a catchy album, though it sounds like most of the other bands in the genre
POSITIVES
Solid musicianship, catchy songs, production is immaculate
NEGATIVES
A bit too formulaic, doesn't really stray too far from the AOR sound, production may be immaculate, but it's maybe a little TOO clean
3