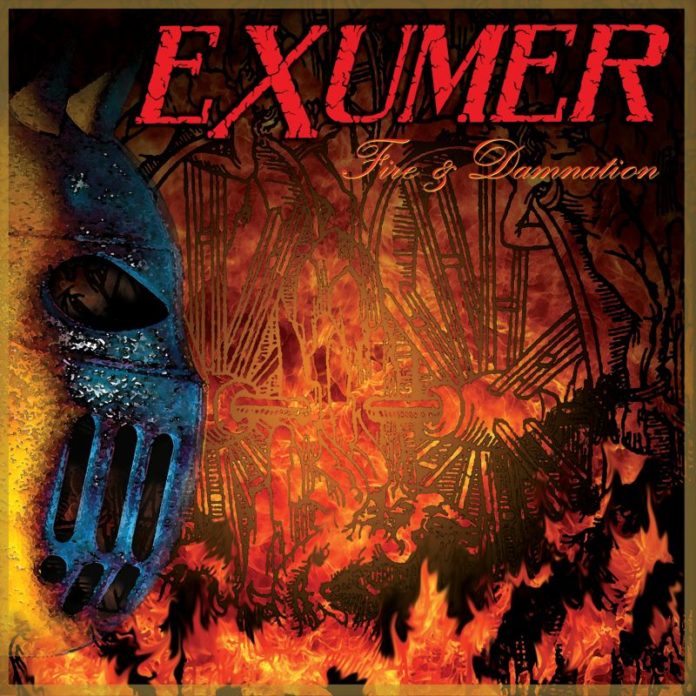 Bam, you weren’t expecting it!  Bam another one!  It’s like a one-two combo from Rocky Balboa.  Two seconds in and you’re already seeing stars.  You regain your footing but you may not make it to the end of the 3 minutes.

A lot like Rocky in his 2006 movie, Exumer are back after a long hiatus with Fire & Damnation.  This album will mark 25 (count ‘em …25) years since they put out a record.  In the grand scheme of things, Axl’s got nothing on these guys.  I half expected a flop of simply because I didn’t believe it possible for a band to reform after 25 years and release a solid album.

Boy was I wrong.

This has got to be one of the strongest metal albums of this year.  For me Fire & Damnation has set the bar as far as thrash albums go for 2012.

But while the album kicks copious amounts of ass, it seems Exumer had a séance that was answered by the ghosts of the thrash past like Show No Mercy by Slayer, Fabulous Disaster by Exodus,  Ride the Lightning by Metallica , Not Yielding to the Ungodly by Living Sacrifice and Lights, Camera, Revolution, by Suicidal Tendencies.  While this isn’t a bad thing per se (at least not for me) it may be too much for some people; they may find the riffs all too familiar and not unique enough.  Case and point, the re-recording of their 1987 track “Fallen Saint”.  Yes, it’s still a rip-off of Slayer’s “Black Magic” I’ll admit, but for all the faults that Fire & Damnation has, it has positives that more than make up for it; the sheer driving pace of “The Weakest Limb”, the bridge of “ A New Morality” and the chorus of “Devil Chaser” are just a few examples of how this album will kick you in the face with it’s fist.

Exumer is without a doubt trying to tap into that nostalgia factor thrash bands of yesteryear have abandoned for a new drop tuning sound. For me, the result is a great re-imaging of classic thrash and I couldn’t be happier.  You’ll find none of that down tuned warbling, annoying metalcore breakdown or sad emo tears here, this is all classic thrash with a sprinkling of crossover and thank god for that.  Fire & Damnation plays to its strengths much in the same way Motörhead has been doing so for 30+ years.  I hope some of these young wipper snapper bands are taking notes; this is how it’s done.

Still, while different than their classic Possesed by Fire material, it doesn’t stray too far, maybe detrimentally so, but that should not stop you at all from checking the album.  However, before you freak out, let me put you at ease in saying that the change isn’t so harsh as to warrant comparison between Rust in Peace and Risk. It’s a new take on old inspirations.  Let’s face it; bands change, especially after 25 years apart.  But it’s not at all a bad thing.  In fact, I’m going to go out on a limb and say that this album is better than Possesed by Fire, much better: the guitars are chunkier, the drums are much tighter and the vocals are much, much better.  Dare I say the band actually sounds like they’ve been practicing all this time?  For me, it’s a certain thing; I know an album’s good when I hope that the song that just finished wasn’t the last song on the album.  And that’s what happened with this Fire & Damnation; it left me wanting more.  No matter the faults the album presents, it always overcomes them with something else.  You simply cannot deny that this is a powerhouse of an album.

Alas, it’s going to come down to a matter of taste for most people; some will walk away disappointed while those who are comfortable with the band’s “references” to old school thrash will walk away with a happily dislocated neck.

In my advice, buy, beg or borrow this album.  Your neck might not thank you, but your ears will.