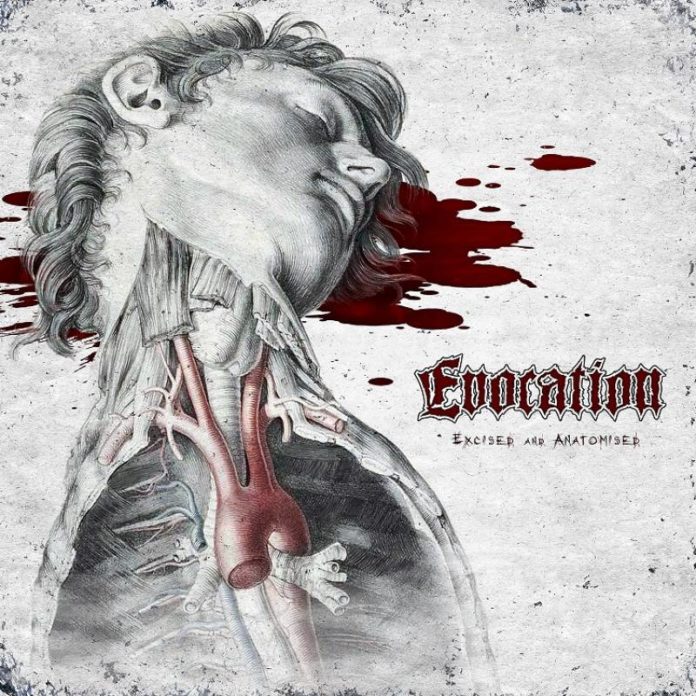 Covering a song is always a risky proposition for a band. How do you make a fitting tribute to the original while still making sure it sounds unique and different? You could always try taking the song in a new direction, which isn’t always guaranteed to work; look on YouTube and you’ll find an endless parade of white hipsters covering a hip-hop standard “ironically” with ukulele accompaniment ((Attention white people everywhere: STOP FUCKING DOING THIS SHIT, FOR THE LOVE OF GOD.)). But sometimes, the cover all but eclipses the original version. Bob Dylan may have written “All Along the Watchtower,” but it’s Jimi Hendrix’s version that we all remember. And Trent Reznor has gone on record as saying that “Hurt” isn’t his song anymore after Johnny Cash shook the world with his interpretation of the Nine Inch Nails classic. But of course, the band could always just cover the song as-is. This is what Swedish death vets Evocation have done on their EP, Excised and Anatomised, and while each cover is played with a sense of love and admiration for the originals, they do very little different from what inspired them.

Evocation pay tribute to five classics of death metal and grindcore, with selections from the back catalog of Bolt Thrower, Carcass, At the Gates, Edge of Sanity, and Napalm Death. “…For Victory” is a rousing call to arms that makes me want to jam a chainsword into a filthy heretic’s skull, but the original does a far better job at giving me that feeling. “Corporal Jigsore Quandary” is a massive offering of sadistic surgical precision, but it still stands squarely in the shadow of the original. “You Suffer” is a single-second slice of pure grindcore chaos, but the Napalm Death original is even shorter and more abrasive than that! And I could certainly do a track-by-track summary of the album in this vein, but I’m pretty sure you get the idea.

So what we’re left with is a selection of classic songs that we all know and love, replayed and re-hashed by another (very good) band. This will certainly keep your interest if you’re a fan of Evocation, and it’s worth a listen if you’re a fan of the other five acts they pay tribute to. But at the end of the day, although I’d certainly call this a welcome addition to the Evocation catalog, I’m hesitant to call it necessary. Evocation aren’t doing anything new or changing the songs all that much, aside from a suitably beefy Boss HM-2 growl on all the guitars. But is that change alone worth the price of admission? Probably not. Evocation have proved three things definitively on this release: they can play their instruments damn well, have a good sense of what makes the Swedish death metal sound, and have great taste in the classics. But we didn’t need this to prove that to us. We knew it full well already.