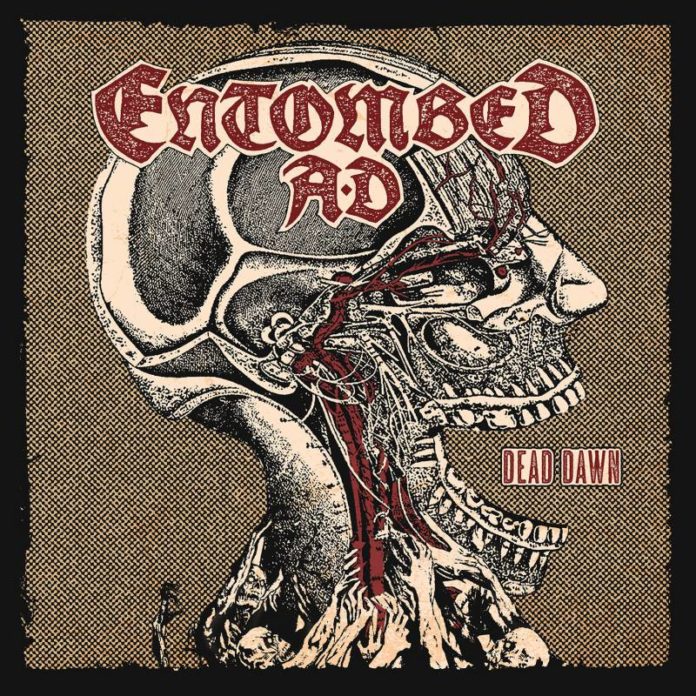 2 years ago, Entombed A.D. (led by vocalist L-G Petrov) emerged from the turmoil surrounding Entombed, and released a pretty solid effort, Back To The Front. While legal disputes over band names can often lead to confusion (just look at the Black Flag debacle), but in Entombed A.D.’s case the fans still got a pretty cool record.

Dead Dawn keeps the metal machine moving forward with 10 brand new tracks of death and roll fury. As has been the case since 1993, fans looking for another Left Hand Path or Clandestine will not find that here. Petrov and company are more interested in grooving these days, much like Metallica is more interested in making money and “experimenting” (seriously, what the fuck was Lulu).

“Midas In Reverse” kicks things off at a pretty furious pace, with a groovy death metal riff that’s easily one of the fastest the band has written in a while. Petrov’s vocals still have a harsh, guttural yelling quality to them, though they actually have hints of melody at times. It’s still too gruff to be considered singing, but the tone actually goes along with the melody of the guitar. “Down To Mars To Ride” has some cool, eerie acoustic guitar bits at the beginning before breaking into a mid-paced groovy tune. Crunchy, fuzzy guitars (that ever-present Boss DS-1 pedal is still in heavy use), thick bass, a light coating of reverb on everything, it’s all still here for Entombed A.D. “As The World Fell” is a particular favorite of mine, thanks to its slower pace, emphasizing the heaviness of the riff, and Petrov’s vocals high in the mix. “The Winner Has Lost” has a very melodic feel, sounding a bit more like classic heavy metal in the vein of Iron Maiden, with galloping riffs and melodic guitar solos.

The production features basically the same sound that this particular set of musicians have created over the last couple of decades. While melodic guitar bits linger in the background of the mix, tracks like “Silent Assassin” have a punchier feel, with a little more in-your-face aggression. The keyboards on “Hubris Fall” come off as a bit cheesy, and can distract the listener from what is actually a pretty great slowed down death metal tune.

There are some really great moments on Dead Dawn (the first 3 tracks absolutely slay), and while the album overall isn’t exactly indispensable, it’s still a pretty decent effort from some of the most influential musicians in extreme metal. Dead Dawn is definitely worth a few spins, so give it a try!

IN A NUTSHELL
A bit like a new AC/DC album, you know what to expect, but are still entertained
POSITIVES
Some of the fastest/heaviest riffs in a while
Some great slower moments changing the pace of the album
NEGATIVES
Not much has changed
Fans of the first two Entombed albums still won't like the groovy sound on this record
4

Rise Of The Northstar – Welcame