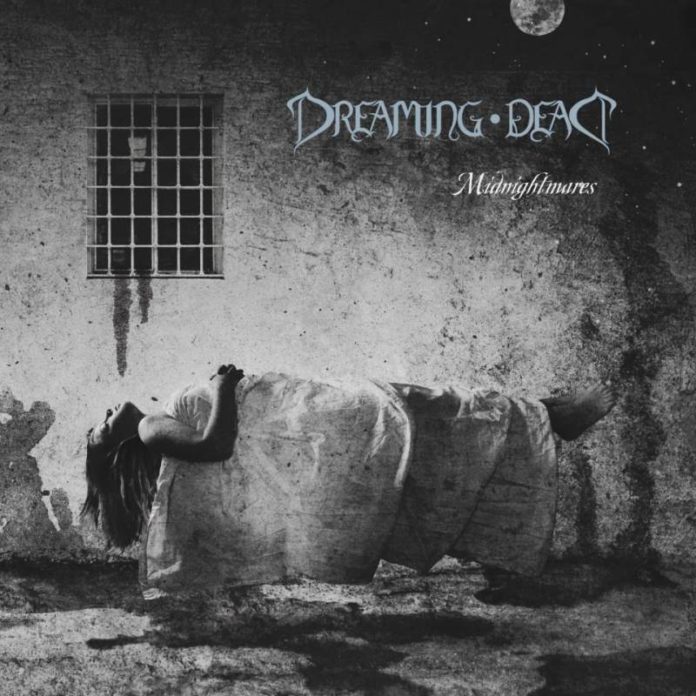 Dreaming Dead is an interesting little band. Mostly a two person outfit with a female vocalist, their second full-length album Midnightmares is a rather enjoyable mix of old-fashioned melodic death metal with some Isis style soundscapes thrown in for good measure (although much, much smaller in scale). It took me by surprise to be honest; Midnightmares is quite polished and in the end has quite a few more positives than negatives.

First let’s get the thing that’s probably in the front of everyone’s mind reading this review out of the way; vocalist Elizabeth Shall does a great job. In fact, by the second (or third, since the first track is actually an instrumental) song on the album you probably won’t give it a second thought to be honest. As for the actual use of the vocals, they never overpower the instruments or sound cheesy in anyway and always give way to allow the instruments room to breathe and have a little creativity. In fact, one of the best things about Midnightmares is how the vocals and instruments interact with each other. One person writing both the vocals and guitars might have a lot of benefits, because both Dreaming Dead and Desultor are two-person efforts with the vocalist also writing the guitars and both have of their respective albums have incredibly tight song structures and are on the whole rather well-written. One thing that would have been nice is a little more range on the vocals, they’re pretty much the same throughout the entirety of Midnightmares, but that’s usually par for the course on melodic death metal albums so it’s not a huge problem.

The guitars are for the most part, very good. Interesting fretwork and plenty of start-and-stop work help keep things interesting throughout the album, and the guitar tone on this album is killer. It’s not often I take note of something like guitar tone on an album, but it perfectly complements the vocals and is a bit ‘warmer’ than what is present on most death metal albums like this. Another thing that is done surprisingly well is the amount of technicality; it’s there but never overly-distracting. It’s just enough to keep you interested in paying attention to what they do without becoming eye-rollingly jumpy and out of place like many other bands have a habit of doing. It makes listening to the songs fun without feeling like it’s becoming work to try and keep up. Don’t get me wrong I love technical death metal, but on an album that employs as many instrumental passages and quiet sections as Midnightmares any extra technicality would have probably just sounded forced and out of place.

The drums are merely passable, which is unfortunate because the guitars and vocals kick ass. They are for the most part standard death metal drums. Some blast beats here, double bass there, but they never really do anything out of the ordinary or exciting. Vocals and guitars take center-stage on Midnightmares, which is a good thing because they are the stronger of the bunch. As I mentioned before though, one thing Dreaming Dead does right are the instrumentals and soundscapes that happen periodically throughout the album. Fast riffs and blast-beats often give way to softer more melodic sections music that really sound great and help separate pieces of music so they don’t all sound the same. Listen to the song “Midnightmares” for a great example; the song slows down right in the middle with a great instrumental interlude. They’re definitely one of the strongest things Dreaming Dead has going for it on this album. In fact, I would say that there should have been more of these sections on Midnightmares because without them, some songs start to bleed together a  little too much. They really are great.

Ultimately lackluster drums and songs that sound too “samey” (at least until they hit one of those great instrumental interlude pieces) hold Midnightmares back a bit, but don’t let that stop you from taking a listen for yourself. Like me, you may wind up surprised at just how good and polished this album is; I can definitely say that I’m looking forward to whatever they plan on putting out next already.