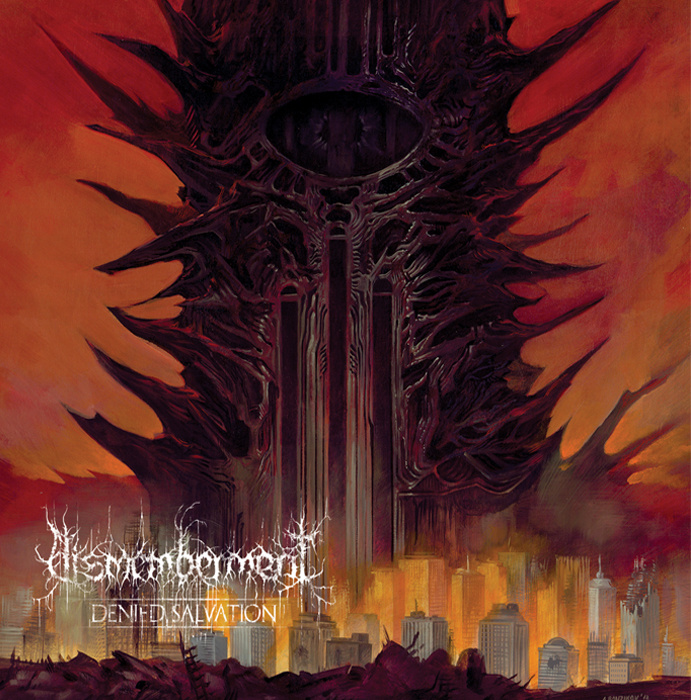 In February of last year I moved down to Columbus, Ohio after having lived in Michigan for my whole life.  Unfortunately for me I wasn’t able to see too many shows here since that relocation, but I was able to catch Immolation on their most recent stop back in October.  They had Gigan and Jungle Rot as direct support, with local support from Kingsblood, Bless The Child, and Dismemberment.  I thoroughly enjoyed my time standing in the front row for all six acts and headbanging like a maniac, and a lot of that was because of Dismemberment.  I really liked their blackened thrash sound and saw that each of the four members could easily hold their own in a live setting.  After that I decided to get more acquainted with the band and borrowed their “The Condemned” EP from a friend of mine and was still drew in by their catchy black/thrash metal hybrid.  Now in this new year I have been entrusted to take on their brand new EP, “Denied Salvation.”  I’m hoping that I will continue to be impressed by this young band as they have been showing a lot of promise.

Dismemberment wastes no time in throwing you to the proverbial wolves with ‘Last Rites’ being the first-of-five tracks to examine.  As soon as the music starts I immediately begin to think of a production sound very similar to “Masquerade In Blood” by Sodom because of its bass-heavy nature.  It is because of that possible homage that ‘Last Rites’ works so well in the first place.  Jacob and Luke Shively’s riffs cut right to the core, J.D. Henderly’s bass is upfront and pronounced, Taylor Emerine’s drums are incredibly powerful, and Luke’s vocal cadences are ridiculously catchy.  There is a lot of melody to go around in this monstrous blackened thrash package.  Now this is how you start an album, folks.

Even though I fell in love with ‘Last Rites’ immediately, I’ll admit that the other four songs took a little bit of time to grow on me.  That doesn’t mean they were bad by any stretch of the imagination, but the way I look at it is that it was a huge gamble to put the aforementioned song at the very beginning, particularly because of its length.  When that happens there is always the possibility of the rest of an album being unable to live up to the expectations one has set for it.  However, I still found myself enjoying the majority of the music that was put on “Denied Salvation.”

‘Reap What You Sow’ has really grown on me with its thrashtastic vibe and catchy chorus, making it feel like a direct descendant from the German thrash metal scene.  Dismemberment do a good job of injecting melody where it is needed so as not to create a sterile product, and their best example of that is ‘Gateways To The Past.’  After nearly a couple minutes of Destruction-worship they spin into a furious section of blastbeats to change things up again.  Those blasting sections never last too long, but they definitely get the job done.  ‘Perpetual Malice’ has a nice mid-paced grooving tempo to it but it never goes anywhere other than how it started.  I have tried multiple times to get into this song, but as soon as the beginning is finished all the way until the solo 2/3rds of the way through the song my mind has always wandered off.  ‘System To Rise’ seems like a mixture of ‘Last Rites’ and ‘Reap What You Sow’ and I really dug it.  It’s not as good as how they ended “The Condemned” with ‘Cryptic Isolation,’ but it works to their advantage.

While Dismemberment label themselves to be a blackened thrash metal band, there are barely any ‘blackened’ influences at all.  Besides Luke’s vocals and the occasional blastbeat, all I hear is straight-forward German-styled thrash metal.  I still really liked what I heard overall, but sometimes I can’t help but think if they brought the black/thrash formula they used on “The Condemned” then I would have been more enthralled.  However, I’m sure the band doesn’t want to be known as just another Toxic Holocaust or Skeletonwitch, so despite that tiny shortfall I respect the choices they made to try and separate themselves from the pack.  Also, one should not go into this album hoping for a lot of vocals, as the music to vocal ratio seems to be 70:30 on most of the songs.

I am very happy to be living in an area where bands like Dismemberment are getting their dues.  They have a good-sized cult following around here and ever since I saw the band live I jumped on the bandwagon.  “Denied Salvation” seems to be a deviation from their previous material, but I think the more diverse a band like this is the better they will do in the long run.  This is also a lesson in why one should always help to support their local scene, because without it then your city will mean nothing.