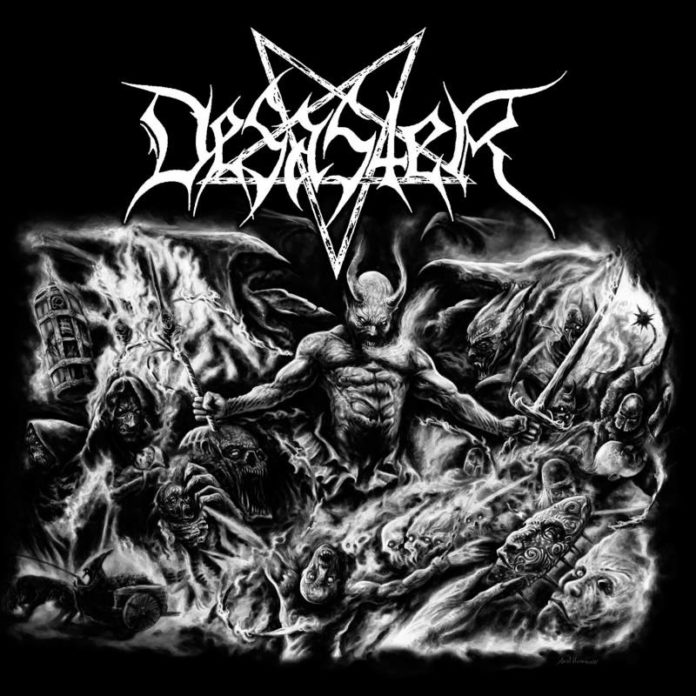 Any band that takes their name from a Destruction song has better deliver on the front of skull crushing heavy metal.  Desaster has been kicking around the German scene since 1988, but this is my first foray into the band.  I would suspect that since they have been at it for so long and have had their last three releases (including this one) released by Metal Blade that they must be doing something right.  I really enjoy finding out bands like this that have been around for a long time, yet through some stroke of dumb luck I have never heard of them.  With that being said, I would like it if you would take a journey with me through the dark and dreary catacombs of “The Arts of Destruction.”

I’m sorry, but please allow me to rant for a moment.  I absolutely loathe introductory tracks that fall into any of these categories:

The reason I say this is because just about every single band does exactly one of those four things and all of them think that this is the track that is really going to hook people into wanting to listen to their albums.  The problem with this is that they are all done in the exact same manner and often have nothing to do with the subject matter of the album itself.  While the introductory track on “The Arts of Destruction” violates the second category, I can forgive its concept since it has some connection with the album itself.  However, what I will not forgive is the sound effects that are supposed to sound like an epic sword battle between the legions of Heaven and Hell are more akin to my fork and knife scraping against a dinner plate.  While it only takes just over a minute for the track to wrap up, all it did was put me in a fowl mood and pull a muscle from rolling my eyes so hard.  All bands who read this, please take note: YOUR “AMAZING” AND “PROVOCATIVE” INTRODUCTION IDEA HAS A FAILURE RATE OF 98%!  EITHER MAKE SOME MORE MUSIC OR LEAVE THE INTRO OUT ALL TOGETHER!

Luckily for Desaster they aren’t in the business of making introductions, because the title-track comes ripping forth with a razor sharp and melodic black metal riff that is accompanied by blastbeats and a black/thrash vocal mixture.  “The Arts of Destruction” has a central sound to it, mainly taking a thrash approach and giving it undertones of melodic black metal, which Desaster does a fantastic job of manipulating when needed.  For instance, tracks such as ‘Lacerate (The Rays of Doom),’ ‘The Splendor of the Idols,’ ‘Queens of Sodomy’ and ‘Troops of Heathens, Graves of Saints’ distinctly have a faster and more thrash-centric sound that is sometimes reminiscent of “Show No Mercy” by Slayer, particularly in the drumming and intricate cymbal work.  The band also makes sure not to forget their melodic black roots as they blend in the aforementioned thrash with wickedly catchy riffs in ‘Phantom Funeral,’ ‘At Hell’s Horizon’ and ‘Possessed and Defiled.’  I did find it very enjoyable the way they structured ‘Beyond Your Grace’ as it makes them sound like a much heavier Bewitched.  Even the instrumental outro is done very well and in ways that are able to cause a sadness of sorts, letting you know that your journey is coming to an end.

The production on “The Arts of Destruction” is a great compromise of keeping that raw black metal aesthetic and integrating it with a full sound.  Everything is as clear as one would want the instruments to be for this type of music, and just keeping the reverb on the vocals was a nice touch, giving it that classic feel.  The drums were miced up wonderfully, and I really enjoyed that aspect most of all through the album, and next to that would have to be the melodic riffs.

Desaster have certainly proved to me why they are still around 24 years after the fact, because this band is more than capable of creating a visceral and memorable record in a melodic black/thrash mash-up.  Metal Blade should certainly be proud of allowing Desaster to continue on the path they have, and in turn giving the public “The Arts of Destruction.”  If you like your thrash with a dark melodic and black tinge to it, then you would definitely be doing yourself a favor by picking up this album.