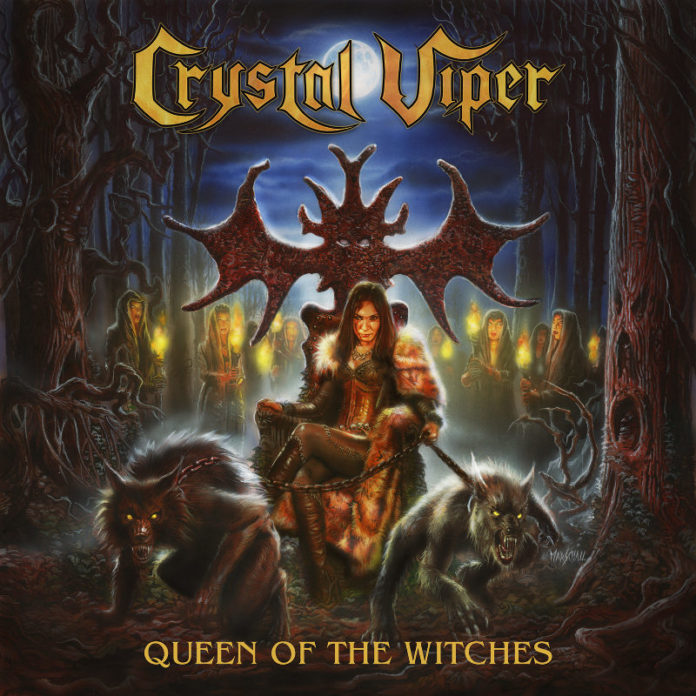 Though it hasn’t been that long since their last album, fans of Crystal Viper who paid close attention to events within the band were probably wondering if the group would ever release another one. After all, the band had announced that they’d take a break after the release of Possession in 2013, motivated in part by health problems affecting front-woman Marta Gabriel.  Thankfully, after these 4 years, they’re jumping back into action with Queen of the Witches.

Appropriately, the first track is titled “The Witch is Back”, establishing the retro heavy metal style (edging into power metal) for any new-comers, and asserting the kind attitude of indomitable rebellion that you’d expect from that mix.  With members of Manowar, Venom, and Saracen guest-spotting in some of the tracks, the album also gives a sense of the support the band has from their friends in those circles of metal, providing an extra feel-good touch to the wailing, noodling, and head-banging beats that carry through the songs.

I’d feel guilty kicking a band trying to get back up from a health-mandated hiatus, but happily, there’s not that much to find fault with in Queen of the Witches.  The songs are nice and sturdy in their construction, with firm riffs and quite a few quick dips into classic shredding, and they hit the mood they intend to square on the head.  Having said that, I do take issue with how slow the drums are kept, since even though that may help with the epic fantasy vibe they want to put across, after a while it just gets distractingly monotonous, an impression which lingers despite picking up speed in the back half. Another issue is that even though Gabriel‘s vocals are of an undeniably high quality (look, for example, at the piano-centric “Trapped Behind”), most of the time her range is fairly restricted.  Hopefully, after the band feels comfortable again, they’ll open up to more experimentation on the next album.

The album is certainly a laudable effort, staying lively and solid throughout its runtime. At the same time, however, I can’t shake the feeling that someone picking it up without any context, unaware of the difficulties that the band experienced, would likely find it to be a decent but unremarkable entry in the genre.